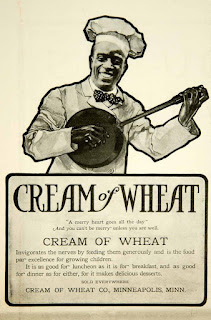 Advertising Age reported Cream of Wheat’s Rastus is the latest culturally clueless character being nixed in an act of revisionist brand history. Plus, parent company B&G Foods has pledged to provide reparations scholarships to aspiring Black and Latinx chefs. Hey, somebody should check if any descendants of Frank White are available and eligible.

B&G Foods will remove the image of a Black chef from all Cream of Wheat packaging and is starting to support aspiring minority chefs through scholarships as the company responds to calls for brands to confront old marketing that is seen as insensitive.

“For years, the image of an African-American chef appeared on our Cream of Wheat packaging,” stated B&G Foods, which has owned the brand since 2007. “While research indicates the image may be based upon an actual Chicago chef named Frank White, it reminds some consumers of earlier depictions they find offensive.”

B&G Foods’ announcement about the Cream of Wheat packaging update comes a day after Mars Food announced its Uncle Ben’s brand would be renamed Ben’s Original, and would drop the image of a Black man from its packaging. Other brands that continue to review their imagery and branding include Aunt Jemima, which In June announced plans to retire its brand name and image, and Mrs. Butterworth’s.

Cream of Wheat was introduced in 1893 and has long been marketed using a Black chef character, which is believed to be based on Frank White. In the early 1900s, Cream of Wheat ads showed the chef to be named Rastus, a name that sometimes implies a simple Black man and that today comes across as racially offensive. That name has not been used by the brand more recently, but the image of the chef on the packaging is interpreted by some as being a servant.

“It seems like their approach is a very thoughtful and understanding one,” says Ned Brown, chief creative officer at ad agency Bader Rutter. “The character is not embedded into the name, so they can recalibrate and change their brand without pulling apart all of the cards that built the house.”

B&G Foods also announced that it has started to develop relationships “with several of the leading culinary schools to help support and aid in the development of African American and Latinx candidates through various scholarship and other initiatives.”

The company has not said how soon the image will be removed, but it can take months for new products to appear in stores. The Cream of Wheat logo without the man’s image appears on B&G’s Facebook page. As of Thursday, Cream of Wheat continued to show the image in social media profiles where it is less active than Facebook. The character is included in its Instagram profile, where Cream of Wheat has not posted since 2018, and in its Twitter profile, where it has responded to posts but has not done one of its own since 2017.