• Wendy’s has decided to remove Biggie portions from its menu. However, it has nothing to do with being healthier, like the fast feeder’s recent decision to switch to better cooking oil (see Essay 667). This latest maneuver is simply a name change motivated by customers’ confusion between Biggie and Great Biggie options. Wendy’s will now go with standard small, medium and large designations. So customers can continue to drag their Biggie and Great Biggie asses to the burger joint without worry.

• A high school graduation in Levittown, Pennsylvania, beefed up security because a street gang had threatened to murder the class president. Attendees passed through metal detectors, and undercover cops roamed through the crowds. The class president wound up delivering his address via satellite video from a remote location. Look for some entrepreneur to soon invent bullet-proof caps and gowns.

• A new survey shows teen smoking is no longer on the decline. Wonder if it’s connected with the increase of folks depicted smoking in television shows and movies. Then again, based on the Levittown graduation ceremony, teens are probably at greater risk of getting smoked.

• Another aspiring rapper was smoked at a Harlem bar. Julio Montez had recently penned lyrics predicting his own death. Then again, a rapper predicting death is like Wayne Newton guessing he’ll get hit by women’s underwear. 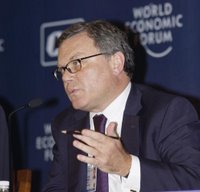 • WPP leader Martin Sorrell (pictured above) pissed off the leader of an ad agency in China. During a press conference to announce the end of a 14-year-old partnership with WPP’s Grey agency, Yan Gang of Beijing Guoan Advertising Corp. said Sorrell “had absolutely no manners, no upbringing and no culture.” Sorrell allegedly failed to meet with Yan Gang to discuss issues surrounding their joint venture. Sounds like a case of Crouching Tiger, Hidden Agenda.

• Nick Minucci (pictured below) was found guilty of second-degree assault as a hate crime, despite a defense that argued using the N-Word is not an act of racism (see Essay 667). “The jury has sent out a message that crimes predicated on hate cannot be tolerated,” said Queens District Attorney Richard Brown. Minucci now faces up to 25 years in prison, where he can continue his N-Word defense with the brothas behind bars.