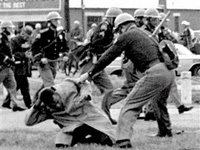 WASHINGTON -- A not-too-funny thing happened to the 1965 Voting Rights Act on its way to renewal in the House of Representatives: A real debate broke out.

The act has been protecting the voting rights of minorities for 41 years. Contrary to widespread and Internet-fed rumors, the fundamental right of minorities to vote is not in danger.

Some of the act’s more controversial enforcement provisions, however, must be reviewed and renewed by next year. Advocates are hoping for a 25-year extension.

No problem, thought leaders of the elephant party. After a stunning 33-1 landslide endorsement from the House Judiciary Committee, House Republican leaders expected easy passage for the measure.

House GOP leaders hoped to use the bill’s passage as a big election-year outreach to minority voters. This would have followed the noble tradition of the late Senate Republican Leader Everett M. Dirksen of Illinois, who helped push President Lyndon B. Johnson’s civil rights legislation to passage in the 1960s, despite opposition from Southern segregationist Democrats and Dixiecrats.

But House GOP leaders canceled their scheduled debate and vote Wednesday. A rebellion broke out, mainly over two issues: the law’s special requirements for the states of the old segregated South, and the law's requirements that foreign-language ballots and interpreters be provided in precincts where substantial numbers of voters are struggling with English.

That language issue is an odd spillover from the ongoing debate over illegal immigration and has no rational place in a debate about voting rights. After all, voters are citizens, regardless of their origins. Any assistance, linguistic or otherwise, that helps citizens exercise their right to vote should be applauded, not exploited by demagogues.

Even so, the English-only lawmakers provided new and unexpected allies for the defenders of states’ rights, bringing the House process to a screeching halt and complicating matters in the Senate, where Judiciary Committee Chairman Arlen Specter (R-Pa.) had planned to bring up an identical bill this coming week.

That’s OK. This country needs to have debates such as this every so often, so we can measure how much racial progress we have made as Americans and how we can best make more.

The 1965 Voting Rights Act’s most controversial provision requires nine states that have a documented history of poll taxes, literacy tests, voter intimidation and other discriminatory voting measures against minority voters to receive “pre-clearance” from the Department of Justice before they can make any changes in their election laws or procedures.

U.S. Rep. Lynn Westmoreland (R-Ga.) became the point man in that argument, saying it was unfair to single out Alabama, Alaska, Arizona, Georgia, Louisiana, Mississippi, South Carolina, Texas and Virginia in this day and age.

Yet, one need only peruse some of the approximately 1,000 cases upon which the Justice Department has acted since the Voting Rights Act was last renewed in 1982 to find plenty that has kept the department busy.

In 2001, for example, the all-white board of aldermen in Kilmichael, Miss., just happened to cancel the town’s local elections only three weeks before Election Day, just as it was becoming apparent that the town's first black mayor and council members might be elected. The aldermen, elected at large, wanted the delay so they could remap the town into districts, which would have protected some board seats held by whites. That wasn’t a good enough reason for the Justice Department, which rejected the change.

In 2003, election officials in suburban Harris County, outside Houston, failed to provide bilingual assistance to Vietnamese voters, who had grown to almost 2 percent of the county population. The Justice Department and Asian-American legal-aid organizations worked out an agreement that resulted in bilingual assistance and other reforms. In the wake of those changes, Harris County elected its first Vietnamese candidate, Democratic businessman Hubert Vo, to the Texas state legislature in November 2004.

Outside the South, you have cases such as the South Dakota gerrymander that packed Native Americans into one state legislative district to limit their political influence. Although the state ignored its obligation to submit voting changes for pre-clearance, the Voting Rights Act gave Indian residents the power they needed to sue the state in federal court, and in 2004, they won.

“The right to vote,” Thomas Paine once said, “is the primary right by which other rights are protected.” Indeed, democracy cannot survive if that right is not protected fully for every qualified voter.

The nine states designated by the act certainly are not the only sections of the country with a history for electoral shenanigans. But neither have the states been inconvenienced terribly, especially in comparison with the inconveniences minority voters suffered before the Voting Rights Act became law.
Posted by HighJive at 10:22 AM