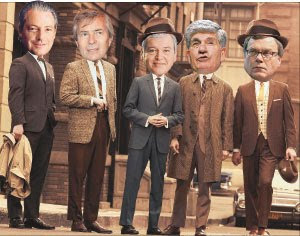 Earlier in the week, Ad Age editor Ken Wheaton posted a perspective on creating a Mad Men knock-off starring minority cast members to attract people of color to the industry. The idea came up during a meeting at Advertising Week. Although MultiCultClassics and others submitted comments at AdAge.com, it seemed appropriate to embellish on the thoughts here as well.

As Wheaton pointed out, the notion is not original. Marc Brownstein suggested something similar back in 2006—before Mad Men even aired—and MultiCultClassics blasted him for his cultural cluelessness.

There are plenty of reasons to question the concept. Despite the popularity of Mad Men, the advertising industry has rarely been a successful vehicle for a series. It’s not like medical dramas, courtroom proceedings or detective adventures. Contrary to the insistence of self-absorbed adfolks, as a TV subject matter, we just ain’t that interesting.

The people making the proposal also cite the career-influencing power of Darrin Stephens in Bewitched. They are usually completely oblivious to characters like Marcus Graham in the iconic Boomerang, thinking no colored people—besides Putney Swope—have ever been depicted in an ad agency.

Additionally, a colored version of Mad Men would ironically pale in comparison to the real deal—almost similar to the way minority shops are viewed as wannabes versus the general market agencies.

Besides, aren’t there already enough efforts designed to lure minority youth? From internships to Adversity, the kids are covered. Can we please stop focusing all our energy on wooing students from the inner city? And if you really believe a Mad Men knock-off would also lure minority mid- to senior-level executives, well, that is Pollyannaish.

Stocking up on seasoned minorities continues to be a conveniently forgotten issue. Plus, it’s pretty sad that anyone would think of financing an entertainment vehicle while the Howard University initiative struggles to collect necessary funding.

Finally, these types of pipe dreams ignore the true problem. Madison Avenue doesn’t need a fantasy program to charm minorities. Rather, Whites in our industry need to be reprogrammed in order to establish an environment where minorities feel welcome. Of course, Whites will overreact to that statement, believing they’re being labeled as racist. That’s not the case at all. But they have repeatedly demonstrated—and openly admitted—that they are clueless about cultures outside of their own. It’s not minorities who must change; instead, it’s the ruling majority.

I agree with many of your points to a certain extent. As you say, the problems in the industry go far beyond the "top-of-the-funnel" approach of just getting kids in the system. Retention is a problem as is the hiring of mid and upper-level management.

I hope to get at that at some point but the higher up that problem chain you go, the more complex it gets. Just because it's complex doesn't mean we shouldn't discuss it, but it does make it harder to include in a column that's 600 words long (ah, print).

In terms of retention, the industry has a problem even retaining white people. One agency guy told me his retention numbers over a five-year-period and I about fell out of my chair. But because there are so many in the first place, it's not that big a deal.

I just figure that "getting the kids in" is one TINY part of the overall approach. Yes, you have to figure out how to keep people, promote them, pay them fairly and reward them up the chain. But I also figure if you have more to begin with (as you figure out the other problems), things become a little easier.

As far as the shows themselves? I don't know that it matters WHAT the shows are -- what they produce. Hell, Mad Men paints an awful picture of the industry (and an inaccurate one), but I guarantee you there are kids out there thinking it's so cool. I'd bet that a show based in an ethnic shop -- or a show ABOUT a couple of black kids putting up with the crap in a general-market agency would speak to people.

For me, it's not about rah-rah-rah (the other huge complaint when I deal with diversity "Ken, you don't show enough of the positive stuff that's going on!") It's about getting it out there. As I said, growing up outside of New York, I never considered advertising. Never occurred to me (too young for Bewitched!). I'm probably guilty of projection here, but I imagine there are a lot of kids (regardless of race) in the same position. I'd also bet that Boomerang put advertising on the radar on more than a couple of people.

But I understand it's a lot of ifs, ands, buts bordering on naive. And, again, one more little piece addressing the entry-level recruiting issue isn't going to solve anything at higher levels, but I figured I'd just throw the old pop-culture thing out there for more discussion while I figured out how to approach the other things you bring up.