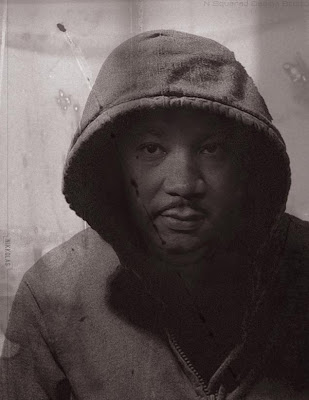 The image, titled ‘April 4th, 1968,’ — the date of King’s murder — was created by artist Nikkolas Smith and appeared on a website featuring posters promoting gun control.

In the wake of George Zimmerman’s acquittal, an artist’s chilling image of Martin Luther King Jr., in a Trayvon Martin-style hooded sweatshirt has gone viral, in an effort by some to link the teen’s death to the struggles of the civil rights movement.

The image, titled “April 4th, 1968,” was created by artist Nikkolas Smith and appeared on a Web gallery of posters promoting gun control.

The title references the date King was assassinated in Memphis, Tenn.

Former Obama adviser Van Jones retweeted the image after the verdict along with the hashtag “RIPTrayvonMartin,” sparking hundreds of retweets, The Huffington Post reported. Versions of it were quickly circulated on Twitter, Facebook and Instagram.

In an interview with Buzzfeed, Smith, a Texas native who works as a creative director at a design studio in Los Angeles, said he created the image a year ago as reports of the killing began to make national news.

Martin, 17, was wearing a hoodie when he was shot and killed during a confrontation with Zimmerman inside a gated community in Sanford, Fla., in February 2012.

Since then, hooded sweatshirts have become a symbol of solidarity among Martin supports, many of whom accused Zimmerman of racially profiling the boy for having his hood up as he walked through the rain on a trip back from a convenience store.

Zimmerman was found not guilty of second-degree murder and manslaughter on Saturday.