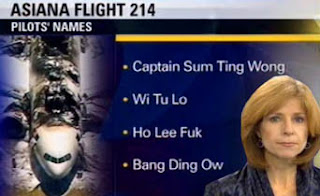 An Oakland TV station was apparently duped into giving racist, incorrect names for the pilots of the Boeing 777 that crash landed at a San Francisco airport on Saturday.

“The NTSB has confirmed these are the names of the pilots on board Flight 214 when it crashed,” Campbell said during the noon report. “We are working to determine what roles each of them played during the landing on Saturday.”

The station later apologized with Campbell saying on the air: “These names were not accurate despite an NTSB official confirming them this morning. We apologize for this error.”

The NTSB confirmed to the Daily News in a statement issued Friday evening that a summer intern—and not an NTSB official—mistakenly confirmed the names of those on the doomed flight.

They said the intern “acted outside the scope of his authority when he erroneously confirmed the names of the flight crew on the aircraft.”

NTSB spokesperson Kelly Nantel said in a statement that the independent government agency “does not release or confirm the names of crewmembers or people involved in transportation accidents to the media.”

She concluded: “Appropriate actions will be taken to ensure that such a serious error is not repeated.”

The National Transportation Safety Board is investigating whether pilot error is one of the possible causes of the crash.