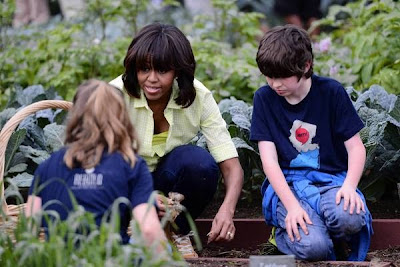 The first lady has pledged to fight junk-food ads aimed at children. But some say her desire to work with businesses kept her quiet when she was needed most.

By Matea Gold and Kathleen Hennessey

WASHINGTON — Shortly after she launched her signature anti-obesity initiative more than three years ago, Michelle Obama signaled she would take on a contentious issue: advertising for snacks, soft drinks, sugary cereals and fast food aimed at children.

She denounced ads that use cartoon characters to push junk food. She bluntly told executives “to step it up” to improve the foods they market to children.

And she promoted a White House “action plan” on obesity that praised a federal effort to come up with voluntary marketing guidelines — the most significant attempt in decades to limit ads targeting children.

But when food and media companies — including many that supported her anti-obesity campaign — mounted a fierce lobbying battle against the guidelines in 2011, the first lady went silent.

It wasn’t until earlier this year, after the guidelines had been blocked, that Obama resumed her call for more responsible food marketing.

Nutrition advocates disagree over how to rein in food and beverage company practices that they believe contribute to obesity, including the roughly $1.8 billion spent each year on marketing to kids: Will companies respond to voluntary efforts or only to government pressure?

Obama has come down on the side of persuasion. She has used her celebrity to reward corporations that join her campaign to encourage children to eat better and exercise more. And she has largely avoided public policy fights that could pit her against the companies, arguing that obesity cannot be eradicated “by passing a bunch of laws in Washington.”

Administration officials say she has notched some notable successes, and they blame Congress for killing the marketing guidelines.

But some who see themselves as Obama’s allies in the fight against obesity believe her desire to create partnerships with industry kept her quiet when her voice would have counted most. Fourteen companies that back Obama’s anti-obesity campaign helped kill the voluntary advertising guidelines, lobbying reports and other records show.

“The White House got cold feet,” said Sen. Tom Harkin (D-Iowa), who had championed the guidelines. “It sort of undermines everything that the first lady was doing.”

Since Obama launched “Let’s Move!” in February 2010, White House officials have insisted that working with industry is the only way to achieve the first lady’s goal of ending the epidemic of childhood obesity in a generation.

“Business and business leaders are a vital component of the solution,” said Sam Kass, the executive director of Let’s Move! and the first lady’s senior policy advisor on nutrition. Obama declined a request for an interview.

The administration did secure industry backing for a requirement that restaurant menus list calorie information. And the first lady rallied support for a 2010 law that expanded the free school lunch program and set nutritional standards for food sold in schools.

But many public health advocates believe a more forceful approach is needed to limit food marketing.

“The industry has proven itself untrustworthy,” said Kelly D. Brownell of Duke University, a leading expert on obesity who has sometimes advised Obama’s program. “Somebody needs to lean on these companies more strongly.”

Obama has worked through the Partnership for a Healthier America; she is honorary chairwoman of the nonprofit group, which was set up to negotiate pledges from food providers to fight childhood obesity.

Wal-Mart has agreed to promote more healthful foods and build grocery stores in underserved neighborhoods. Darden, owner of the Olive Garden and other restaurants, promised to improve its children’s menus. And 16 food and beverage manufacturers, including Kraft, General Mills and Nestle, pledged to cut calories from their products.

The organization, however, has secured only a few pledges to change the way companies market food.