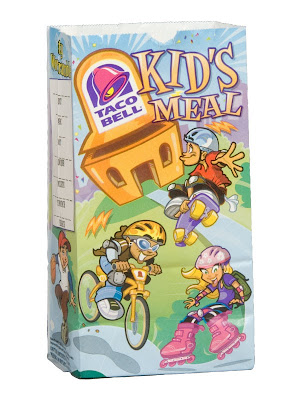 Advertising Age reported Taco Bell has decided to dump its kid’s meals. Um, Taco Bell’s adult food is made from Doritos and Fritos—what the hell was in the kiddie cuisine?

Taco Bell said Monday that it’s eliminating kids’ meals—often a target of nutrition activists—from its menu. Taco Bell is touting itself as the first national fast-food chain to do so, noting that the move will be completed by January.

The chain said it’s ditching kids’ meals because they aren’t relevant to its core customer—millennials, generally in their late teens and early-to-mid ‘20s. “As we continue our journey of being a better, more relevant Taco Bell, kid’s meals and toys simply no longer make sense for us to put resources behind,” said Greg Creed, CEO of Taco Bell, in a statement. “What does make sense is concentrating on expanding choices that meet and exceed the diverse needs of consumers of all ages, without losing focus on what makes us great today.”

While consumer-advocacy groups may applaud the chain for cutting kids’ menus, Taco Bell’s kids’ meals accounted for only a small sliver a sliver of overall sales. Kids’ meals represent 0.5% of its sales, according to the company. Taco Bell posted an estimated $7.5 billion in U.S. system-wide sales in 2012, according to Technomic. Kantar Media does not show any media spending on kids’-meal marketing at Taco Bell in 2012.

Compare that to McDonald’s, where Happy Meals account for about 10% of U.S. sales. Considering McDonald’s had $35.6 billion in U.S. system-wide sales in 2012, according to Ad Age’s DataCenter, that’s more than $3.5 billion in Happy Meal sales last year alone.

And though Taco Bell may be the first national chain, Jack in the Box two years ago announced it would eliminate its kids meals. At the time, consumer-advocacy groups used the news as leverage to convince other chains to consider ditching kids’ meals. Center for Science in the Public Interest even called on Taco Bell in it’s press release: “We hope that McDonald’s, Burger King, Wendy’s, and Taco Bell are paying attention to Jack in the Box, which has decided to stop using toys to market fast-food meals to children.”

CSPI did not offer comment on Taco Bell’s move by press time.

Though the kids’ meals will be gone, some of the items, such as the Crunchy Taco, Soft Taco, Bean Burrito and Cheese Roll-up, will still be available on the regular menu.