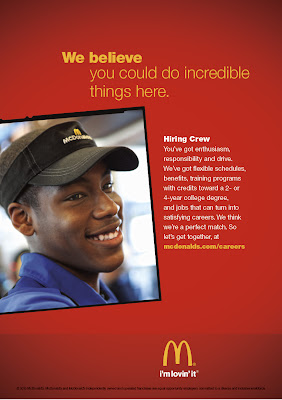 From The Miami Herald…

‘McBudget’ an insult to those living in poverty

A few words about the McBudget.

Perhaps you’ve heard of it. As fast food workers around the country protest for higher wages, we learn that McDonald’s offers advice to help them live on the wages they make which, while not technically bupkes, do amount to a paycheck you can pretty much have the driver cash for you on the bus ride home. In December, for example, Bloomberg profiled a Chicago man who, after 20 years with the burger giant, earns $8.25 an hour — and doesn’t get 40 hours a week. This, as McDonald’s CEO Don Thompson pulled down, according to the Wall Street Journal, a compensation package worth $13.8 million last year.

Anyway, Mickey D’s isn’t blind to the difficulties of french fry makers and drive-through order takers getting by on not quite bupkes. It partnered with Visa on a website — http://www.practicalmoneyskills.com/mcdonalds/budgetJournal/budgetJournal.php — which includes a sample budget showing how to live reasonably well on next to nothing.

The impossibility of doing so has been attested to by everyone from writer Barbara Ehrenreich in her book Nickel and Dimed to noted obstetrician Cliff Huxtable, in that episode of The Cosby Show where he uses Monopoly money to teach young Theo the value of a good income. It has also been attested to by the people trying to do it. But all that notwithstanding, the McBudget insists it can be done.

As you might expect, the McBudget is mildly controversial. Washington Post blogger Timothy B. Lee called the figures “realistic” and praised McDonald’s for “practical” advice. This seems to be a minority opinion. ThinkProgress, the left-leaning website, called the budget “laughably inaccurate.” Stephen Colbert skewered the company, saying a $20 health insurance premium will buy you “a tourniquet, a bottle of Night Train and a bite stick.” In the Wall Street Journal, columnist Al Lewis suggested that McDonald’s $13.8 million man show us how it’s done by volunteering to live on the McBudget.

The most vexing thing about that budget is its condescension. Take it from this welfare mother’s son: If there’s one thing poor people do not need, it is lessons in how to be poor. To the contrary, you will never meet anyone who can wring more value from a dollar.

We’re talking every trick of layaway and two-day-old bread, coupon clipping and off brand buying, Goodwill shopping, Peter robbing, Paul paying and plain old going without. You ever hear of a jam sandwich? That’s when you “jam” two pieces of bread together and call it lunch. Heck, if you handed the federal budget over to a couple welfare mothers, we’d be in surplus by December.

And McDonald’s has lessons for the poor?

Look, there are many reasons people wind up in poverty. Sometimes they make bad life choices — they drop out of school without salable skills, or they become teen parents. Often, it falls on them from the sky in the form of illness, injury, addiction or financial reversal.

However they got into poverty they all need — and deserve — the same things: a way to work their way out and to be accorded a little dignity while they do so. The former comes with paying a living wage, the latter by treating people with respect and not presuming to teach them what they could teach you. McDonald’s fails on both counts. 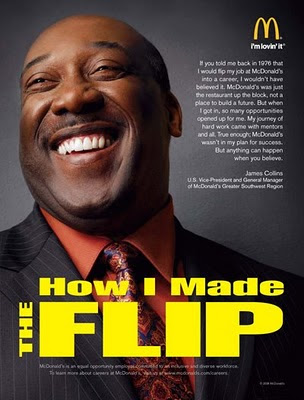