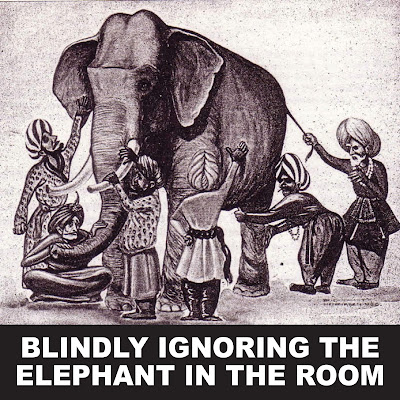 Campaign reported JWT London will seek to address diversity via a “blind recruitment” scheme for entry-level candidates. While candidates will still have to submit a CV, it won’t be reviewed until later in the process because JWT admits “submitting a CV limits diversity of opportunity to enter the advertising industry.” Um, is that a confession of biased and discriminatory hiring practices? The contrived tactic is screwy on a number of fronts. First, it ignores the bigger problem regarding a lack of mid- and senior-level minority talent, who will presumably continue to face rejection in epic style. The mystery arrangement also ignores the issues of cultural differences; that is, minority newbies may be inserted into an exclusive environment that isn’t equipped or qualified to welcome them. In the end, JWT doesn’t need a “blind” program. Rather, the White agency needs a curriculum to reform the deaf and dumb discriminators. Oh, and all successful job applicants will win a blind date with Gustavo Martinez.

JWT London to use ‘blind recruitment’ for entry-level hires

J Walter Thompson London has pledged to use a “blind recruitment” approach in its next round of hiring at entry level as the WPP agency seeks to improve its diversity.

The recruitment scheme, called JWT Pioneers, has up until now sought graduates, but the agency is now seeking applicants from a wider range of backgrounds.

Applicants will be still be asked to submit a CV, but the agency said this will no longer be looked at until the candidates are whittled down to a much later stage. Instead, applicants will now be asked to answer six questions which will be used to assess them for interview selection. JWT said submitting a CV limits diversity of opportunity to enter the advertising industry.

JWT has also widened the scope of roles being offered. As well as traditional roles in account management, planning and creative production, the agency is also looking for applicants with any background who could specialise in shopper marketing, CRM or insight and analytics.

Tamara Ingram, the global chief executive of JWT, said diversity and inclusion would be top of her agenda when she took the job in March. Ingram replaced Gustavo Martinez, who had resigned following accusations of sexism and racism made in a discrimination lawsuit.

The WPP shop will take applications until 12 September, interview candidates in mid-October, and look to have new starters beginning work in January 2017.

Kate Bruges, co-director of talent at JWT London, said: “We know that talent comes in a huge variety of forms and from different backgrounds and generations. You might be a recent graduate, a school leaver or, alternatively, you might have been working for a few years and realise you yearn to do something more creative.

“We really don’t mind what your background is and whether your interest is in analytics, PR or film — what matters to us is that you are curious, courageous, capable and collaborative.”

It's all for naught, I'm afraid.

This plan leaves out all but the most junior level incoming hires, and (as usual) completely ignores the few minorities already in the system at higher levels. It would make heaps more sense to support those already through the door.

It doesn't apply to the creative department, so there's not going to be any change in the people who decide what kinds of people and images the public sees in advertising. Hint: Mixed race and ambiguous talent will always be their first preference.

And it doesn't address who gets the final job offer. You can pre-screen and quiz junior talent all you want, but the vague idea of cultural fit still rules the day in adland.