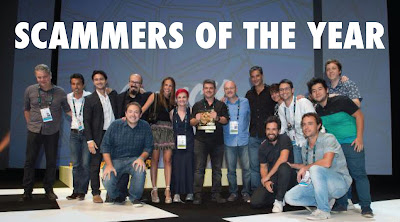 Marketing Magazine spotlighted the big winners at Cannes, and the list shows how cheating and cultural cluelessness will never adversely affect an agency’s chances for awards success. AlmapBBDO was named Agency of the Year, despite being caught entering a sexist scam ad which temporarily won a Bronze Lion—and there were seven women serving as judges in the category. Meanwhile, 180LA won the Grand Prix for Good, despite also producing a racist spot for 360FLY. Expect Cannes 2017 to feature keynote speakers Gustavo Martinez and Neil French—who both worked for WPP, honored as Holding Company of the Year.

The Agency of the Year award, collected from all the awarded and shortlisted work earned by a single agency, was won by AlmapBBDO – which was subdued to some controversy and had to return a Bronze Lion for a Bayer campaign the client did not even pay to run. The Palme D’Or which honours the most awarded production company, went to Tool (USA).

REI’s Anti-Black Friday (also called “the greatest anti promotion of all time) campaign #OptOutside won the Titanium Grand Prix. Just a few days earlier, the campaign won top award in Promo & Activation. “We loved it because it took Black Friday, this day when people are driven to spend even more money, and REI decided to do the opposite and close their stores, asking everyone and their staff to go outside and have a good time,” said jury president and BBH founder Sir John Hegarty at the press conference.

“The Grand Prix goes to a new way to use security camera footage to sell a rewards card, of all things, for a retailer. It’s just a phenomenal piece,” Film Lions jury president Joe Alexander, chief creative officer at The Martin Agency said. “I think the best pieces now cross over. This one ran in cinema, it ran as an incredible viral piece. It’s a very modern piece of film that lived in both worlds.”

According to the Film Craft jury, Droga5 was competing against itself as they had to choose between “Rule Yourself: Michael Phelps” and Droga5’s Hennessy’s “The Piccards,” before finally choosing the former. “We chose this piece because, at the end, it’s the one that transcended the craft and just reached out and touched us,” said Film Craft juror Steffen Gentis, chief production officer of BBDO Germany. “The craft became completely invisible, and we just found ourselves completely immersed.”

180LA and UNICEF got the Grand Prix for Good for “Malak and the Boat,” from the “Unfairy Tales” campaign that features a series of films that first seem to start out like sweet stories but then take turn: the children are actually running for their lives from war-torn Syria.

BBH New York’s “FU2016” campaign for House of Cards’ fourth season earned took home the top prize in Integrated. Integrated juror Pete Favat, chief creative officer of Deutsch, said BBH New York‘s campaign hit all the right marks in the category. “We were looking for brilliant execution through the line of every one of the pieces,” Favat said. “This was a slam dunk.”

Cannes isn't really a competition. It's an expensive personal display made up of entrants who could afford the thousands and thousands of dollars to put their vanity projects in the gallery, judged by their own circle of friends and colleagues. It's mostly expensive cronyism and fake projects are everywhere (hint: PSAs).