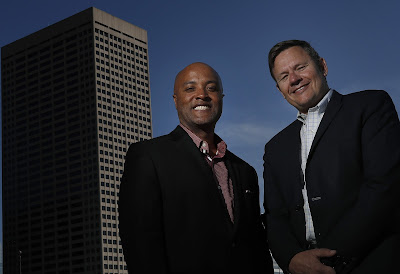 A MultiCultClassics visitor pointed to a StarTribune article reporting on the dearth of diversity in the Twin Cities advertising community. To help solve the problem, White advertising agencies are turning to—ta da!—The BrandLab. Why do White advertising agencies presume minority candidates do not exist—and such candidates must be bred in specialized training programs? It feels like faux philanthropy that’s actually philistinism.

The BrandLab is trying to pick up the pace by doubling percentage of minorities by 2017.

After three months of unanswered and rejected job applications, Travon Sellers decided to remove his headshot from his résumé.

Sellers, who is black, thought his five internships, college degree, years of experience as a freelance designer and support from industry contacts would be enough to earn him an entry-level job at a Twin Cities advertising agency. To that point, though, the 24-year-old south Minneapolis native had been shut down.

People of color make up little more than 6 percent of Twin Cities advertising industry employees, less than the racial diversity of the general population and lower than the nearly 23 percent of the broader national workforce in advertising, public relations and related services who are nonwhite, according to a study published last year by advocacy group the BrandLab.

By 2017, the BrandLab wants to double the percentage of minorities in the local industry and is expanding its services to achieve that goal.

“Whether we like it or not, advertising is so ubiquitous it influences how people feel about themselves, how they see themselves,” said Mike Lescarbeau, CEO of ad house Carmichael Lynch and a BrandLab board member. “So if the people making that work all come from the same background likely that work is going to be narrow in its depiction of human beings and roles people can play and all that.”

Despite outreach efforts to attract minorities to the field such as Sellers, who went through two BrandLab internships, many industry insiders admit frustration that marketing offices still remain mostly white even during a time when clients are clamoring for more minority representation on their creative teams and in their ads.

“In the advertising arena, you can still count with your fingers the number of people in a given agency that are people of color,” said Lorenz Esguerra, the managing director of business development at Minneapolis ad agency Colle+McVoy.

Twin Cities firms need to increase their racial diversity to stay competitive against other agencies in markets on the coasts or in larger cities that naturally attract diverse talent, he said.

“Gone are the days where you basically target women and you bring a team of men; that doesn’t work anymore,” said Esguerra, who is Filipino. “Or you pitch a Hispanic audience, and you don’t have somebody that actually represents that market. It just isn’t authentic.”

Nowadays, some advertising clients ask for bios of the agency’s account team complete with photos to see how diverse the group coming up with their marketing ideas is — a practice that was unheard of five years ago, said Erinn Farrell, general manager of advertising firm Space150.

“The more backgrounds you bring into that and the more points of view you bring into that, you strengthen the idea by challenging it,” Farrell said. “It’s not one note. Suddenly it becomes layered. Those layered ideas are good for business.”

Two years ago, Space150, which doesn’t track its diversity numbers, removed its education and age requirements to try to get more diverse candidates. This spring the firm launched its internship program on Snapchat so potential interns could use its geofilter feature at campuses and expanded its usual targeting to include historically black schools like Howard University and Spelman College.

While many marketing professionals acknowledge the diversity problem, they give varying reasons for the dearth of ethnic minorities in local advertising operations.

Dorion Taylor has grown used to being one of the only black people in the room. The unwanted title has followed him since he was a teenager when his parents sent him to a mostly white high school in the Milwaukee suburbs to his current position as director of new business at Carmichael Lynch, where people of color make up more than 10 percent of the agency.

While Taylor made the decision early on that he wanted to be in a creative field, he said many young people, especially those of color, aren’t aware that advertising is a viable career option.

“They still don’t know what they can do … I think it’s just getting that pool bigger,” he said.

To Elliott Payne, the lead strategist for Space150, much of the problem has to do with how people are hired, which he said can be inherently biased. Oftentimes, advertising job openings are spread by word-of-mouth and are filled quickly.

Payne, who is black, was told of an available job at Space150 after he met the then vice president of strategy in his graduate school class. Not everyone can be so lucky, he said.

“The natural forces at play in this industry is to hire who you know and if the people who work in the industry don’t have a diverse personal network, the network of the industry is not going to be diverse,” Payne said.

After he was inspired by black social justice movements that erupted in the wake of police shootings, Payne decided to build his own network of people of color within the local marketing world. Starting last fall, Payne, who also volunteers for the BrandLab, organizes monthly social meetups for the group to help people better network.

A marketing office can’t begin to address the diversity problem until it builds an inclusive work environment, said Carmichael Lynch’s Lescarbeau. Even when a person of color gets a foot in the door, he or she won’t stay if he or she feels marginalized within the office, he said. Inclusion extends beyond race and also includes gender, sexual orientation, age and other differences.

“I think agencies traditionally have been tough places to break into and it takes quite a bit of time for people to feel a part of things,” he said.

The BrandLab has been trying to guide students of various ethnic and socioeconomic backgrounds into marketing careers since 2007, when the late John Olson, who was head of the Olson ad agency, founded the group. Christine Fruechte, BrandLab board chair and chief executive of Colle+McVoy, became involved soon after the organization was established.

“This is not a new issue,” Fruechte said. “It has been an issue that has been around as long as I’ve been in the industry, but it’s one that leaders have to take responsibility for and set the tone from the top down.”

At Colle+McVoy, which is currently helping to pilot new BrandLab workshops, about 12 percent of the staff are people of color.

The BrandLab offers several programs including a classroom initiative in which staff meet with high school students in their schools and teach a marketing curriculum. This past school year was a record of about 720 students being served in 14 metro schools.

Another large part of the BrandLab is its summer paid internships at marketing offices across the Twin Cities. Numerous agencies as well as companies with in-house marketing offices partner to host interns or donate to the organization including 3M and Best Buy. The BrandLab also provides around $30,000 in college scholarships each year.

Sellers, who went through the classroom program, a scholarship and internships through the BrandLab, said when he first went on tours of agencies he determined “I need to do this!”

As the BrandLab looks to the future, it plans to expand its offerings to make sure young people thrive as they enter the industry, said Ellen Walthour, BrandLab executive director.

The BrandLab is piloting “Fearless” workshops that it hopes will help companies’ staffs deepen their comfort in talking about race and biases. BrandLab is launching a mentorship program where marketing professionals team up with BrandLab alumni. The organization is also creating a mobile app alumni network so that graduates can stay in touch with one another. In addition, the BrandLab will start to offer skills-based training for alumni such as how to build a portfolio to help them be more competitive as they apply for jobs and internships, Walthour said.

“Full success is … meeting kids in high school, exposing them to a career they never heard of, building a pathway, breaking down barriers and making sure they land,” Walthour said.

Besides taking part in BrandLab activities, Walthour gave several other ways companies can diversify their workplaces. For one, agencies should publicly post all their job openings to allow for a larger and more diverse pool of applicants, she said. They should also make sure all of their internships are paid so that it’s not only people who can afford to be unpaid who are applying for internships. Agencies should also collect and release their demographic data to keep better track of how well they are doing, she said. The BrandLab will conduct another survey in the fall of marketing companies’ diversity rates.

Despite the challenges, BrandLab supporters and industry insiders say they are confident that numbers will improve.

Mandana Mellano, chief media officer at ad firm Fallon, who is Iranian American, said she encouraged other people to not give up on finding their way in the industry.

“I think it’s so important for people to know that there are options and sticking with your plan. … If everybody comes in and gives up, where do we go?” she said.

Late last month, Sellers finally was given the break he needed when he landed a job as the marketing information manager at the National Sports Center in Blaine, Minn.

“I have no doubt that I will be a creative force in this industry. … I know I’m going to kill it. I’m going to climb the ladder.”

I look at the comments on that article and there is no way in hell I would consider working at an agency in, around, or near Minneapolis.

If the response is indicative of what the cultural and creative temperature is like in that city, they don't want or welcome anybody other than small market minds and talent.