Advertising Age posted a Bloomberg News story on racist attacks via Twitter against Leslie Jones, with USA TODAY and other sources supplying more details on the ugly scenario. Jones received support from the public, celebrities and Twitter CEO Jack Dorsey. Not sure if Allstate has extended its Good Hands® to the actress.

Twitter promised to strengthen its rules and procedures in order to curb targeted abuse against users, beginning with a ban against Milo Yiannopoulos, technology editor for the conservative news website Breitbart.

Known by his Twitter handle @Nero, Mr. Yiannopoulos is accused of leading an online campaign of racial and sexual taunts against Leslie Jones, who appeared in the “Ghostbusters” remake last week. Fed up with the abuse, Ms. Jones said Tuesday that she was leaving Twitter for good.

“No one deserves to be subjected to targeted abuse online, and our rules prohibit inciting or engaging in the targeted abuse or harassment of others,” Nu Wexler, a spokesman for San Francisco-based Twitter, said in a statement. “Over the past 48 hours in particular, we’ve seen an uptick in the number of accounts violating these policies and have taken enforcement actions against these accounts, ranging from warnings that also require the deletion of Tweets violating our policies to permanent suspension.”

Mr. Yiannopoulos, who had more than 338,000 followers on Twitter, responded in a comment on Breitbart, saying that Twitter’s actions violated the right to free speech.

“With the cowardly suspension of my account, Twitter has confirmed itself as a safe space for Muslim terrorists and Black Lives Matter extremists, but a no-go zone for conservatives,” Mr. Yiannopoulos said. “This is the end for Twitter. Anyone who cares about free speech has been sent a clear message: you’re not welcome on Twitter.”

Ms. Jones’s departure and the ban followed an attempt by Jack Dorsey, Twitter’s CEO, to resolve the situation. Earlier, he had reached out directly to the actress: 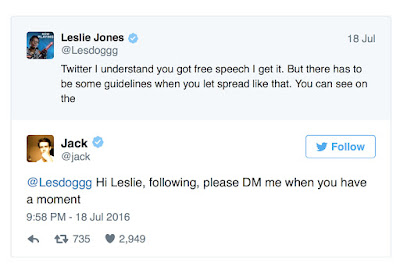 Twitter has struggled to balance its desire to provide an open forum for all views, while keeping it from becoming a deafening megaphone for people seeking to harass another user. In January, Twitter took the step of removing Mr. Yiannopoulos’s verification—the blue check denoting an authenticated account—but did not go any further. Last month, Omid Kordestani, Twitter’s executive chairman stressed that all voices were needed, even amid hateful rhetoric.

In any case of blocking a Twitter user, the decision is subjective, after review of user reports sent to the company about abusive behavior. Mr. Yiannopoulos’s supporters are saying that Twitter’s actions show an anti-conservative bias, and are unearthing controversial tweets that didn’t get blocked.

Making Twitter safer from those who harass and make threats is one of Mr. Dorsey’s top five priorities for the year, and he has vowed to get tougher on trolls. Now, Twitter said it will take a closer look at how it polices abusive behavior.

“We know many people believe we have not done enough to curb this type of behavior on Twitter,” Mr. Wexler said. “We agree. We are continuing to invest heavily in improving our tools and enforcement systems to better allow us to identify and take faster action on abuse as it’s happening and prevent repeat offenders.” Twitter would seek to reduce “the burden on the person being targeted,” he said. “We’ll provide more details on those changes in the coming weeks.”