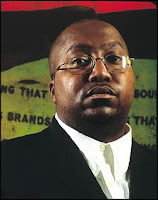 Below is another response to a Tiffany R. Warren post at AdAge.com’s The Big Tent, submitted by Cliff Franklin of FUSE in St. Louis (pictured above)…

Tiffany, I understand where you are coming from. And I realize that you are sincerely trying to help young African Americans get into the business. I get it. But I am not sure if you and others realize that this type of dialogue gives the industry “air cover” for its racism. Again, we fully recognize that this is a part of your job, just like many of the people who handle diversity in the industry. Diversity means just what it sounds like. It doesn’t mean inclusion or meaningful participation or ensuring that money is being spent with African Americans.

It is refreshing to see that Sanford Moore can counter “pie in the sky” rhetoric that we see time and time again from African Americans in the advertising business. The reality is that there are some varying schools of thought depending on if you work for one of these segregated ad agencies or if you own or manage your own advertising agency. But many of you need to be careful of the harm you are causing by giving these racist ad agencies an out. And yes, many of these ad agencies are practicing covert racism.

The bottom line is that this industry hasn’t done a damn thing. It comes down to money and economic empowerment. Black Ad Agencies could hire more young African Americans if we had a larger piece of the pie. $260 billion was spent on advertising in the US in 2006 (different sources post different numbers). Of that amount, $3.9 billion was spent in African American media. Of that amount, only $1.4 billion of capitalized billings was spent with African American ad agencies and this number is bogus because most AA shops do not buy media of any significant magnitude (numbers are estimates). These figures are shameful.

This industry functions on billings, fees and marking up production. And because most African American shops have little cushion or room for error, most will not speak up. I truly understand. Because when the ad industry suffers a downturn or catches a cold, we catch pneumonia. But we have to unite and speak up and cannot afford black folks defending the 4A’s or the AAF and this includes some of the black ad agencies who are afraid of their own shadow. There is nothing anyone can say to appease black folks that will soften the facts. You need to remember this the next time you are chairing a multicultural or diversity committee.

The facts are that African American ad agencies are irrelevant to the industry and marketing executives and African American consumers are not a priority because the so-called general market believe that they can capture this consumer with mainstream efforts. The December 3 issue of BrandWeek cites marketers’ 2008 priorities. Those priorities are Gen X, Hispanic and Women. That equates to lower or no budgets for African American advertising in many of these corporations.

Until we are honest and admit that the 4A’s and these segregated agencies empower certain minorities to “keep the dialogue” going to mask their real intentions of doing little with African Americans in this industry, we will continue to not be a united voice. It is no different than what they did during the civil rights movement. Certain black folks were empowered to “keep the peace.”

If many of you in diversity at these agencies or in diversity at these major advertisers want to help, instruct your agency or clients to take 2% of their billings and partner with an African American shop in a joint venture. Those young people that you are trying to help can then get experience in the African American agency and with the large agency. They now have access to the best of both worlds as well as a mentor, which is lacking in the Madison Avenue shops.

If we are not talking about money, then we are just talking.