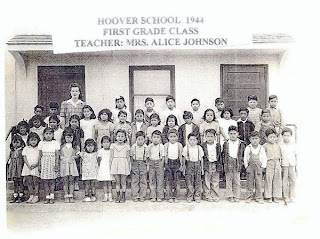 Civil rights history — in Orange County
Years before Brown vs. Board of Education, Gonzalo Mendez, Lorenzo Ramirez and other working parents led a battle that forced school districts in central Orange County to integrate.

It bothered Sandra Robbie that she didn’t know.

She’d grown up in 1970s Westminster, the daughter of a Mexican American family.

She’d learned all about Selma and the March on Washington.

But Robbie, 54, graduated from high school and college without ever being told about Mendez et al vs. Westminster, the battle waged for civil rights in her own community.

“I had all this history around me and didn’t know it,” she told me.

Years before the Supreme Court ruled in Brown vs. Board of Education that state laws segregating public schools were unconstitutional, Gonzalo Mendez, Lorenzo Ramirez and other working parents led a battle that forced school districts in central Orange County to integrate.

Latino parents confronted school administrators, held community meetings and eventually went to court. In 1947 they won. Their victory in federal court helped integrate all California schools and reverberated throughout the Southwest, where segregation of Latino students was common.

But if you go looking today in Orange County for the places where that history unfolded, you’ll find it tough going. There are no markers or street signs directing you to the homes, offices and schoolhouses where a few parents fought and eventually defeated a racist status quo.

So Robbie, a filmmaker and self-described “Mendez maniac,” has launched an effort with Chapman University to help keep that history alive. She’s developing an O.C. civil rights walking tour and is working with Chapman to build an archive of documents related to the case.

“The way our schoolbooks taught it, segregation was something that only happened in the South,” Robbie told me. “But it happened here too.”

To illustrate her point, she took me around the city of Orange in her VW bus. One of our first stops was a small tan building on a barren lot next to railroad tracks. “This was the Cypress Street School,” she told me.

The all-Mexican campus was shuttered by local officials not long after they lost the Mendez case. Today it’s a storage facility.

Much of the history of segregation in Orange County has been wiped off the map, both literally and figuratively.

Forced to integrate the schools, O.C. administrators closed and eventually razed most of the Mexican-only campuses because they were suddenly deemed substandard. The Latino families who had fought to integrate the schools were ashamed of what they’d been forced to endure — so they didn’t celebrate or commemorate their victories.

Gonzalo Mendez died in 1964. He never talked about the case after winning it. One of his daughters, Sandra, didn’t know about her family’s role in California history until she stumbled upon the names of her mother, father and sister in a history book at UC Riverside.

“The history of segregation is something that’s always been hard to talk about,” Robbie said. “It’s painful.”

But knowing where you’ve been can help you get where you need to go. And in recent years, with new challenges to the fairness of California’s education system, the Mendez case has been getting some long-overdue attention.

The U.S. Postal Service issued a commemorative Mendez stamp in 2007. And last month, President Obama announced he would bestow the Presidential Medal of Freedom, the nation’s highest civilian honor, on Sandra Mendez’s older sister, Sylvia, a plaintiff in the case when she 9 years old.

“Young people today need to know that people have fought for them to have an equal education,” said Sylvia Mendez, now 74. “And that people are continuing to fight for them.”

Robbie is working to create something like Boston’s Freedom Trail, a self-guided tour of sites associated with the American Revolution.

Orange County was once, and perhaps still is, a bastion of conservatism — but it turns out to have more than enough civil rights history for a daylong walk or drive.

“Martin Luther King spoke here, in 1961,” Robbie told me, in downtown Orange, as we passed the columns of Chapman University’s Memorial Hall.

Our visit to Orange was a lesson in the way history can be hidden all around us.

The center of Orange is one of Southern California’s great gems. Its circular Plaza, first laid out in the late 19th century, is a vision of friendly, small-town U.S.A.

But a block north of the Plaza is an old theater marquee that today houses a religious center. In the 1940s, it was the Orange Theatre. Whites sat in the orchestra section, Mexicans in the balcony — until a Mexican American soldier returning from World War II refused to obey the rules.

“If you don’t move up to the balcony,” an usher told him, “I’ll have to call my manager.”

“I just came from fighting the Nazis,” he said. “I’m pretty sure I can handle your manager.”

Such scenes played out across California in the years after World War II, as returning black and Latino vets confronted old prejudices at home.

Several blocks to the south of the Plaza is Hart Park and the municipal pool known as “The Plunge.” It too was segregated. “Monday was ‘Mexican Day,’” Robbie said. “And the next day they’d drain the pool and clean it so whites could use it the rest of the week.”

Those days may seem far away to some of the people who’ll take Robbie’s tour when she gets it started sometime next year. But Sylvia Mendez wonders how far we’ve come.

In recent years, schools — in Santa Ana and Los Angeles — have been renamed for her mother and father. “Those two schools are 99% Latino,” Mendez said. Sometimes, in moments of frustration, she’ll even say that the campuses feel more segregated now than they were back then.

In some places, segregation by law has been replaced by segregation in fact, she said. “We’ve come full circle.”
Posted by HighJive at 10:26 AM