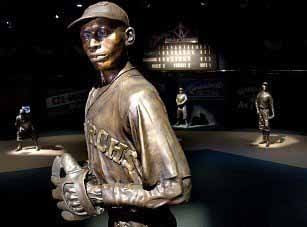 Where was the glove?

Before leaving Atlanta, James “Red” Moore (no relation) told me to look for his old first baseman’s glove when I got to the Negro Leagues Baseball Museum. Said Mary Moore of her 94-year-old husband, who is among the fewer than 130 players left from the leagues, “Oh, lordy, Jesus, we promised the glove to them, and we went on and gave it to them. Yeah, and it’s the only thing we really had left from back then.”

So, moments after I walked into the museum, I searched from exhibit to exhibit, but the glove wasn’t there.

The doomsayers are correct, I thought. They swear on a stack of Josh Gibson trading cards that since the death of baseball saint Buck O’Neil four years ago, his obsession inside of Kansas City’s 18th & Vine district was going, going, nearly gone.

That’s gone, as in the diverse folks who yearly join the 50,000 or so who come this way. They’ve clicked the turnstiles from Presidents Clinton and Bush to Bobby Knight to Lou Piniella, who brought all of his Seattle Mariners and watched them each contribute $100.

That’s also gone, as in the doomsayers who suggest the museum eventually will drown from clueless leadership.

The museum will survive, by the way. And despite the economy leading to financially challenged museums everywhere, this one will prosper better than most. That’s because, after you spend an afternoon with chairman of the board Pellom McDaniels and interim president Ray Doswell, you can tell this leadership is far from clueless.

We needn’t go further than this: McDaniels is a San Jose native who was an NFL linebacker and defensive end, and Doswell is a St. Louis native who was a high school teacher. But they both love baseball with the Negro Leagues deepest in their hearts, and they both are historians with fancy degrees, and neither is afraid to say the unpopular.

Not even the man himself wanted such tags.

“Mr. O’Neil was such a star, though. He was so beloved, and he even danced at my wedding, because he was just great, and we all loved him dearly,” said Doswell, 41, referring to the eternally pleasant soul who soared into national prominence during Ken Burns’ original documentary on baseball in the mid-1990s. “The museum truly benefited from Mr. O’Neil’s presence, but as an institution, the museum has to do a better job of delivering the message that he ultimately was trying to give.

“That message was to have people come and learn about these great teams and players and communities that supported baseball in another era. It’s about the larger story.”

It’s about the story beyond baseball and sports.

It’s about how the Negro Leagues officially were founded by Rube Foster in 1920 inside the old YMCA building just a few hook slides from the museum. It’s about how America’s struggles with race throughout the 20th century mirrors the trials, tribulations and triumphs of those inside and outside the league. It’s about how the Negro Leagues Museum is helping to spur growth in a section of Kansas City that once was the social and financial hub of the city’s black community.

This is the museum’s 20th year overall and 14th in the impressive building it shares with the American Jazz Museum. During the early years, O’Neil and a handful of folks operated the Negro Leagues Museum across the street from the upper room of a building. Then it expanded downstairs in 1994 before the city opened the new place three years later with $20 million worth of bonds.

McDaniels and Doswell aren’t satisfied. Like all decent leaders, they have a vision, and theirs is so close to happening with the renovation of that 96-year-old YMCA building into a place for the Buck O’Neil Education and Research Center.

Said McDaniels, 42, “It would be just a component, because it extends the narrative, not only of the Negro Leagues, but of the larger foot print of the Kansas City black community. And we would like to host a baseball kind of series here—with historically black colleges coming to play classics. That would incorporate a stadium (around the 18th & Vine district), and it would inspire youth to go to HBCUs (Historically Black Colleges and Universities).

“We’re not just stopping with having a museum. It’s just an anchor that we can use, because we realize we have to have a big idea that the entire community can benefit from.”

Read the full story here.
Posted by HighJive at 2:59 PM