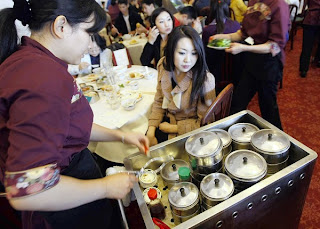 Trekking to Chinatown to feast on the delicacies is a holiday tradition for many in the Southland.

On Christmas Day, with most businesses shut down and many a family holed up at home for the holiday, one stretch of the city always stays bustling.

Chinatown has long been a trusty holiday refuge for transplants far from home, Jews and other non-celebrators hungering for a place to go or just looking to avoid the hassle of cooking.

Parking is as scarce as usual on Hill Street. Crowds make their way as always up the stairs in the plaza that’s home to Empress Pavilion. And as on all other days, after they walk past the vendors hawking jade pendants and decorative fans, visitors have to wait a while for their numbers to be called over the loudspeaker before being seated in the busy dim sum palace.

Inside, to the click-clack of chopsticks on porcelain, waiters zigzag around tables with steaming tins of pot stickers and roller carts stacked with clear plastic cups filled with pearl tea.

For many, what started out as a necessity — because nothing else was open on the holiday — over the years became a favorite annual pilgrimage.

Jacquie and Kenn Latzer, who now live in Charlotte, N.C., said dim sum in Los Angeles has been their holiday staple for almost two decades. Asked why Chinese on Christmas, Jacquie Latzer, 62, put it plainly: “He’s Jewish, and I’m Baha’i.”

The pair went to Empress Pavilion straight from the airport Saturday, even before seeing their children, who live in Los Angeles.

Robert Garcia, a Long Beach city councilman, who sat at a table loaded with spareribs and shrimp dumplings, said his family is multiethnic: Peruvian, Thai, Japanese and Jewish, just for starters. “We all do different things, so this is a good way to come together,” he said. “Everyone loves dim sum. And everyone agrees they’re open.”

Garcia had trekked all the way from Long Beach for the food. “It’s because the dim sum in L.A. is better than the dim sum in Long Beach,” his sister’s boyfriend chided. Garcia nodded, before quickly coming to the defense of his constituency: “No, no, it’s not.”

Norman and Jeanne Lee said Chinese food on Christmas Day is their family’s norm. But this year they brought along their daughter’s volleyball coach, who sat across the table taking in the scene.

Ken Poon, Empress Pavilion manager, said Christmas is the busiest day of the year. His dining hall seats 500, and he estimated that for a typical Christmas Day lunch he fills each table at least four times. Extra food is brought in for the occasion, and preparations begin days in advance.

Poon said dim sum’s popularity on Christmas can be credited to more than just convenience.

“Dim sum,” he translated, “means something from your heart for loved ones.”
Posted by HighJive at 11:55 AM