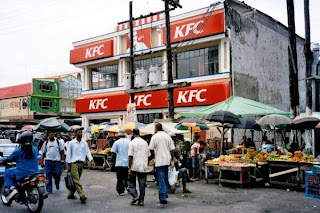 Newser reported KFC is expanding in Africa. This news likely is not connected to the announcement that IMAGES USA was named KFC’s Black advertising agency. At this point, only one thing is certain: It will be a major challenge to avoid creating stereotypical and offensive ads.

Kentucky Fried Chicken wants to take over Africa. Like McDonald’s and other fast-food giants, KFC parent company Yum Brands has been countering the slowdown in American spending with expansion overseas. Having populated China with KFC outlets, Yum now plans to double the number of stores in Africa to 1,200, the Wall Street Journal reports. KFC has had an outlet in South Africa since 1971, but Yum plans to open them, and sister restaurants, in Nigeria, Namibia, Mozambique, Ghana, Zambia, and elsewhere.

Yum is betting that its expansion will be supported by a growing African middle class—more than 40% of Africans now live in urban areas, and the number of families with disposable income is surging. Though they ignored the continent for a long time, firms “are now focusing on the emerging world, with a bit of a gold rush going on,” says Yum’s CEO.