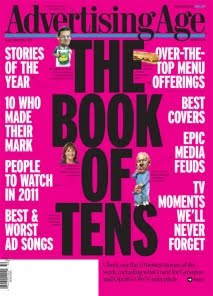 Advertising Age published The Book Of Tens—with at least ten points worth noting.

• Old Spice made a second appearance in the Campaigns Creativity Loved category, along with Jay-Z’s “Decoded” multiplatform effort from Droga5 (hey, why didn’t Translation handle the campaign?).

• Best Ad Songs Of 2010 also gave a thumbs up to the State Farm jingle rejiggered by Translation. Really?

• Ad Songs We Never Need To Hear Again essentially stated Wyclef Jean’s music for Ritz crackers went over like his attempt to become the president of Haiti.

It is time for the industry to get its act together to address this long-standing concern. For years, the marketing community has been sharply criticized for its lack of diversity. Despite a wealth of “diversity programs,” there has been no way to demonstrate real progress due to inadequate data, a lack of centralized and coordinated management and inconsistency in the industry’s commitment to “solve” real issues. Currently, there is a debate as to what the marketing community can and should do. The industry needs to make a commitment to real, tangible and measurable progress. We have talked about this for too long—now we must do something that will make a difference.

Gee, Bob, maybe you could start by desegregating your ANA conferences.

• Jargoniest Jargon We’ve Heard All Year featured Open The Kimono—a cultural phrase that is never attached to diversity initiatives in our industry. That is, agencies refuse to be transparent in their hiring and recruitment practices.

• 10 Who Made Their Mark honored BET Executive VP-Chief Marketing Officer Janet Rollé for reviving the iconic network. Kraft Chief Marketing Officer Mary Beth West also made the list. In a 2009 interview, West recalled that in high school, “I discovered being Black is where my heart is.” West was recently “given oversight of the Cadbury business as the leader of the global chocolate team.” Perfect.

• People To Watch offered the obligatory shout out to Oprah.

Ross Love, 64
A longtime Procter & Gamble vet, Ross Love was the first African-American to serve in the post of VP-advertising at the company. He held the position from 1987 until 1996, when he left to run his burgeoning urban-radio network. As former chairman of the Association of National Advertising, he worked with the Clinton administration to develop the first TV-content ratings. With the Partnership for a Drug Free-America, Mr. Love led a task force that developed anti-drug ads for African-American youth. He is remembered by colleagues at P&G as a mentor for many both inside and outside the company.

And this man never won an ADCOLOR® Award—yet Steve Stoute, Queen Latifah and Earvin “Magic” Johnson did?!
Posted by HighJive at 12:24 AM

ANA President-CEO Bob Liodice --> this guy has no power. He's only a talking head. 2011 that lawsuit by cyrus mehri will drop.