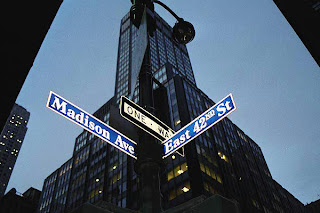 The New York Post reported Madison Avenue has been picking up more work from clients, leading to a jump in hiring. Wonder how many of the new jobs will be filled by minorities.

Concerned the nascent US economic recovery won’t last, many of the country’s largest corporations are holding the line on hiring and instead outsourcing their work to…Madison Avenue.

Advertising firms’ payrolls have jumped by 5.9 percent so far in 2010, with much of that gain attributable to agencies taking on tasks that used to be handled in-house by their clients, executives tell The Post.

The boss of a New York agency said his offices were overflowing with roughly 200 hires since January—all the result of incoming business. The ad chief, who did not want his name or his company identified, said clients’ fears of hiring new employees put the present boom into perspective.

“They need flexibility in case things don’t get better,” he said.

As the outsourcing ramps up, agency revenues are soaring.

At Mindshare, a unit of one of the biggest ad agency holding companies, WPP, North American revenue is up 25 percent this year, according to a spokesman, John Wolfe, who noted that more than 30 percent of the growth has been in digital, search and analytics.

David Bank, an advertising analyst for RBC Capital Markets, observed: “[US] ad agency organic growth is astounding even in the context of an easy comparison [with recession-hit 2009].” Bank added that agencies are turning in close to double-digit organic growth and are staffing to meet that need.

At holding company Omnicom, which houses agency brands BBDO and OMD, sales grew 8.4 percent in the third quarter, Bank noted. At Interpublic Group, organic growth came in at 10 percent over the year-ago period.

Publicis, the other major holding company, is growing at a similar clip.

Chief marketing officers at big corporations lost power to their CFO colleagues as the recession took hold and now, as the situation is reversing, agencies have become the beneficiaries. “Many companies wanted to pay less and knew they’d get less,” said Bank. “Now, people are starting to pay more because they want more.”

“The amazing thing about this year is that America is performing like an emerging market,” WPP boss Martin Sorrell told Ad Age. In the midst of the recession, Sorrell had been skeptical of a US comeback.

With the upper hand, some agencies are starting to flex their muscle. IPG agency MRM told Home Depot in late September that it would not continue to work with the home improvement giant without a change in compensation. Ultimately, the two split over the issue.

“Agencies are trying to be more disciplined about pricing. There isn’t so much of a get-business-at-any-cost mentality,” added Bank, who is predicting a 5 percent uptick in organic growth at ad agencies in 2011.

Separately, a report by BIA/Kelsey yesterday noted that local TV ad revenue will soar 17 percent to $18.5 billion in 2010, compared to 2009, thanks to increased spending on advertising.
Posted by HighJive at 8:13 PM