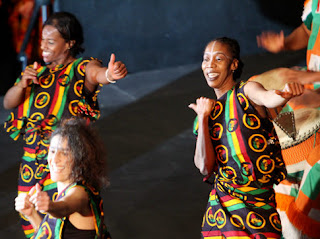 The New York Daily News reported on Kwanzaa celebrations throughout the area. No word on any Kwanzaa cake sightings.

New Yorkers rang in the first day of Kwanzaa on Sunday with festive food, African dancing and the traditional lighting of candles to symbolize unity.

More than 100 revelers kicked off the seven-day celebration at Boys and Girls High School in Brooklyn, sharing a communal meal of salmon stew and rice and beans.

Those who braved the blizzard to celebrate were rewarded with African dancing and drumming to lift their spirits.

“At Kwanzaa, we celebrate our ancestors who came before and gave to the community,” said Byrd. “I grew up with the principles of Kwanzaa in my heart. It’s meant for family to come together. I love this season.”

Benjamin Arastead, 71, of Harlem said he’s been attending the Kwanzaa Collective event nearly every year since its inception 35 years ago.

“It’s a way for people who have gone into hiding for the winter to come out,” said Arastead. “It’s a great tradition. It doesn’t require that you have a particular religion.”

Created in 1966 by a black-studies college professor in California, Kwanzaa is an African-American cultural event based on the harvest times celebrated in Africa.

“Kwanzaa is an important acknowledgment of black culture,” said Clymenza Hawkins, 55, an illustrator from Harlem. “It’s nice to see a community come together.”
Posted by HighJive at 12:17 PM