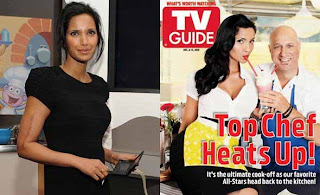 Fresh off the premiere of ‘Top Chef All Stars,’ Padma Lakshmi and Tom Colicchio are all smiles on the cover of TV Guide. It’s what happened after the photo was taken that may leave fans frowning.

It appears that Lakshmi, the Indian-born host of ‘Top Chef,’ has had her skin color digitally lightened. The radiant host and food writer is hailed for her jaw-dropping beauty, so it comes as a surprise TV Guide would retouch her image so excessively.

PopEater’s photo team is crying foul. Lakshmi’s glow has been replaced by a chalky and unsettling skin tone. It’s heartbreaking to think TV Guide would alter the image of Lakshmi, a role model not only for South Asian women, but for everyone who doesn’t fit Hollywood’s rail-thin, Caucasian mold.

Last year, Lakshmi attributed the inspiration behind her jewelry line to her Indian culture and upbringing. “Jewelry is so much a part of Indian culture—especially Indian feminine culture—that it couldn’t help but play a significant role,” she told Jewel Snob.

It’s not the first time accusations of skin lightening have been made in the media. Elle magazine was accused of lightening ‘Precious’ star Gabourey Sidibe’s skin tone on an October 2010 cover.
Posted by HighJive at 10:17 AM