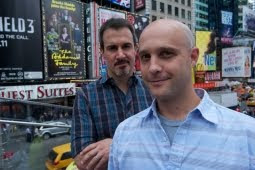 Starting this month, Mr. Galvan is chief creative officer and Mr. Olper is business development and integration officer at the New York-based agency opened seven years ago by Daisy Exposito, who headed WPP’s Hispanic agency Bravo Group for many years.

“When I heard they were no longer at Totality, I reached out,” said Ms. Exposito, who is CEO and chairman. “The level of experience Leo and Mau bring will strengthen what we have and bring us to the next level as we build the New American agency.”

She said Mr. Olper will work with her to run the agency and on new business, and take on one of the agency’s key accounts, McDonald’s business in the tri-state area.

“Our plan was to stay together,” Mr. Olper said of his job hunt with Mr. Galvan. “We work well together and bring a lot of trust between two departments.”

The two joined Havas’ Totality unit in 2010 to reinvent the company’s foundering Euro Latino as a multicultural unit housed at Arnold Worldwide. The effort didn’t gain traction, and Havas tried to integrate what little multicultural work it had with its agency networks.

Mr. Olper and Mr. Galvan aren’t alone in returning to a Hispanic shop after trying to build a multicultural unit at a general-market agency. Earlier this year, Sandra Alfaro moved to Lopez Negrete Communications, the largest Hispanic-owned agency, after a year running KBS&P’s effort to create a Hispanic unit within the general-market shop. That unit, called Ramona, closed after losing its only significant client, Tecate.

General-market agencies are persevering in building Hispanic capabilities. McGarryBowen, for instance, has 12 people working on Hispanic business for Kraft Foods and other clients.

D’Exposito & Partners is No. 27 in the ranking of the top 50 Hispanic ad agencies in Ad Age’s Hispanic Fact Pack, and has a staff of about 50. The agency grew revenue by 5.9% to $7.0 million in 2011. In addition to McDonald’s, clients include AARP, the U.S. Army’s media business, Amway, the pre-paid RushCard and ConAgra Foods, which Ms. Exposito said started with one of its brands, Chef Boyardee, and now is doing Hispanic work for ten brands.