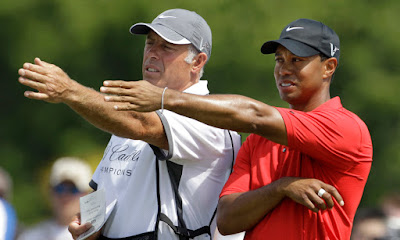 Tiger Woods and caddie Steve Williams were one of the most successful player-caddie partnerships in history before splitting in 2011 following the fallout from Tiger’s infidelity scandal. Since then their relationship has taken a sharp, ugly turn for the worse.

Tiger remains mostly quiet on the issue, but Williams has been continually outspoken about his relationship with his former boss. Now he’s coming out with a new autobiography, Out of the Rough, and he’s returning to the well another time.

In an excerpt published online by Stuff.co.nz on Sunday, Williams said that at times the 14-time major champ treated him like a “slave”. Warning, there’s some mildly salty language:

I was adamant that some of his behaviour on the course had to change. He was well known for his bad temper and, while that wasn’t pleasant to witness, you could live with it because it ended as quickly as it started. But he had other bad habits that upset me. I wanted him to prove to me he could change his behaviour and show me — and the game of golf — more respect.

One thing that really pissed me off was how he would flippantly toss a club in the general direction of the bag, expecting me to go over and pick it up. I felt uneasy about bending down to pick up his discarded club — it was like I was his slave. The other thing that disgusted me was his habit of spitting at the hole if he missed a putt. Tiger listened to what I had to say, the air was cleared and we got on with it — his goal was to be the best player in history and my goal was to keep working as best I could to help make that happen.