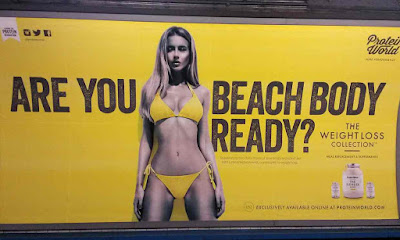 The Guardian reported the Advertising Standards Authority—UK’s advertising watchdog—launched an investigation over gender stereotyping in adverts. Given the admission that the “increasing political and public debate on equality issues” inspired the initiative, it’s safe to say this is another example of diverted diversity in adland. After all, the ASA is essentially segregating the “equality issues” to focus on protecting White women. “We’re serious about making sure we’re alive to changing attitudes and behaviours,” declared ASA CEO Guy Parker. So what about racial and ethnic stereotypes in adverts—as well as the underrepresentation of minorities in campaigns? Guess it’s easier for the ASA to show concern for objectifying White women versus discriminatory depictions for people of color.

ASA launches investigation into gender stereotyping of women in adverts

The UK advertising watchdog is to launch an investigation to see whether rules about the objectification, sexualisation and stereotyping of women in ads need to be tightened.

The Advertising Standards Authority, which received more than 37,000 complaints and banned or forced changes to almost 3,500 ads last year, said that it was prompted to start the research project into gender stereotyping in ads following the “increasing political and public debate on equality issues”.

The ASA will also look at the depiction of men and boys in advertising, however it is the portrayal of women which is likely to garner the most scrutiny.

Campaigns such as Protein World’s “Beach Body Ready” ads have sparked a huge backlash about body-shaming and objectifying women.

The ASA cleared the campaign of breaking rules despite almost 4oo complaints and 70,000 signatories to an online petition about its portrayal of women.

The advertising watchdog banned the ad for misleading health and nutrition claims.

The ASA said it would explore a range of issues including how ads present women with an idealised or unrealistic body image, the mocking of women and men in ads where they take on roles against stereotype, and using gender-specific marketing tactics to target children. “We’re serious about making sure we’re alive to changing attitudes and behaviours,” said Guy Parker, chief executive of the ASA.

The ASA said it intended to examine the evidence on gender stereotyping in ads, seek views from the ad industry and other stakeholders, and commission research into public opinion.

The ASA said it would be open-minded about the outcome of the research project, but that if the evidence suggested tougher regulation was needed it would look to implement new rules. “We’ve already been taking action to ban ads that we believe reinforce gender stereotypes and are likely to cause serious and widespread offence or harm,” said Parker. “We want to engage further with a wide range of stakeholders on the effect of gender stereotyping on society, including through our call for evidence.”

Earlier this month, the ASA banned a Gucci ad for irresponsibly featuring an “unhealthily thin” model.

In February, the watchdog banned a campaign featuring girls taking slimming pills to lose weight for a beach holiday after 200 complaints that it promoted an unhealthy body image among young women.