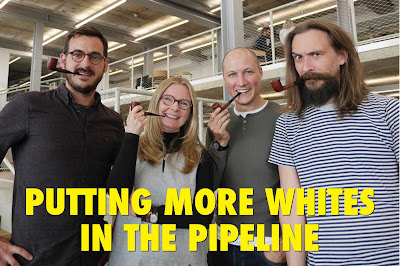 Campaign reported on a new internship scheme from Ogilvy & Mather apparently designed to attract a truly diverse crop of Whites into the field. Appropriately called The Pipe—as the idiots behind the concept must be smoking some pretty serious shit—the programme targets White folks ranging from young people unable to afford college to retirees. Ageism be damned! Plus, O&M joined other White agencies in signing a pledge to pay a minimum amount of money to newbies. So not only will there be a greater number of Whites flooding the industry, but they’ll probably receive more compensation than inner-city minorities earn. Brilliant.

Ogilvy & Mather has become the latest agency to set up an initiative to boost diversity, with a group-wide creative internship programme.

In a bid to ensure applicants come from all walks of life there are no requirements for people entering the scheme to have any particular qualifications or experience. Ogilvy is looking to hire 14 interns through the programme, which is called The Pipe in homage to founder David Ogilvy’s smoking pipe.

A spokeswoman said it was hoping for a huge variety of candidates — from 18-year-olds who cannot afford to go to university through to 65-year-olds who have retired and are looking for a new challenge.

The Pipe’s application process will require budding creatives to first send in a piece of creative work — anything from an ad design to song lyrics. Then, 200 applicants will have two weeks to answer a brief before the top 50 are invited for an interview.

The Ogilvy & Mather creative directors Johnny Watters and Angus George came up with the idea for The Pipe, and are supported by the group chief creative officer Emma De la Fosse and head of talent acquisition Matt Jordan.

Aspiring agency creatives often have to work lengthy periods for free or just expenses before securing their first full-time job. With rents and the cost of living rising, this has led to an increasing proportion of junior creatives coming from more prosperous backgrounds.

Creature’s creative partner Stu Outhwaite and Ben Harris have led a campaign, supported by Campaign, to ensure agencies commit to the Placement Poverty Pledge. It requires shops to pay their creative placements the London Living Wage and at least £100 a day after three months. 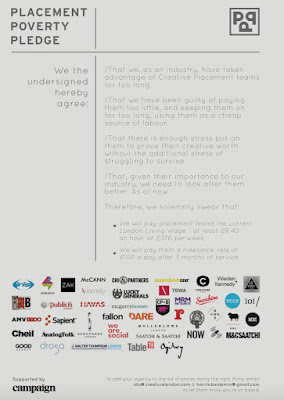 In theory, this is a nice idea.

In practice, what's going to happen there, is what happens here in New York.

Blind submissions on paper and through the internet get ignored and collect dust, while "must-hire" friends of friends get the first dibs on sit-down interviews.

The Creative Director's babysitter's (white) brother, the (white) grandfather of the AD, the (white) middle-aged golfing buddy of the account supervisor and the (white) client's (white) nephew will all be first in line for precious face time, and ultimately be the ones hired because "they just feel like the right cultural fit."