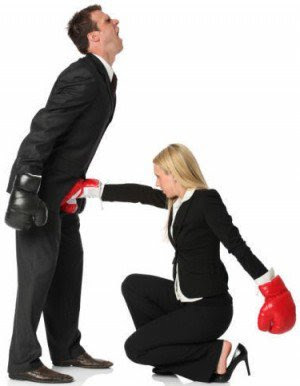 Campaign columnist Maisie McCabe published a perspective on admen behaving badly, wondering if the industry was “really ready to fight for gender equality.” Um, the average Mad Man isn’t even ready—or able and willing—to fight for regular equality. The current White women bandwagon is likely fueled by a longing for fairness—that is, a lust for fair features.

Is ‘cadland’ really ready to fight for gender equality?

What would you do if someone in their early twenties approached you during the dog minutes of an awards show to ask for your advice on getting into the industry?

Would your response depend on how attractive they were or how much Champagne you had consumed?

One such aspiring advertising executive included me in an e-mail to an experienced creative in the wee hours of Friday morning. In the e-mail, she told a depressingly believable story. Unfortunately, the man — for it was a man — had been more interested in looking down her top than offering any practical advice when she spoke to him at the Creative Circle Awards at the Roundhouse that evening.

Apparently, the adman said he would like to take her home as she would be “a better trophy” than the ones handed out on stage earlier. It’s amazing that she didn’t rush off to hail a cab right then. Just as we found last year with the Protein World campaign, young women are just not willing to put up with stuff they think is sexist and degrading. And isn’t it wonderful.

In her e-mail, the woman said she had been “blown away by the work you all create and what you represent yet last night you showed me exactly why women are a minor group in the industry”. The man in question did not receive the e-mail as she got the address wrong. But I know who you are. And I hope you had a shocking hangover on Friday.

The IPA and Campaign research into gender published earlier this year found that women make up just 24.6 per cent of creative and design departments. The proportion among the most senior ranks is even smaller. Paul Burke suggested in Campaign last week that the prevailing creative team model was partly to blame. But there are so many other factors at play.

It’s depressing that this kind of incident happened on the very same day that the Advertising Standards Authority asked for evidence on the issue of gender stereotyping in ads. The body wants to hear people’s views, read academics’ research and do a study of its own to ensure that the regulatory system is getting it right on the portrayal of the sexes in advertising.

If your response to a person interested in getting into the industry is to gush about how attractive they are, I’d suggest it’s unlikely that you’re committed to portraying men and women responsibly in your work for clients. I might be wrong, but I’d be surprised.

If the J Walter Thompson scandal has taught us anything, it’s that no-one should stand by while colleagues act inappropriately. We owe it to the next generation not to leave it to them to call people in authority out.