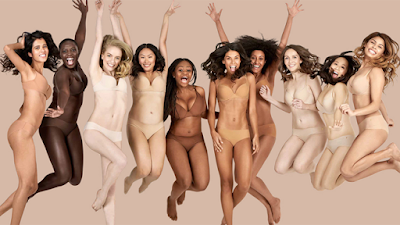 Adweek reported on the Naja “Nude for All” lingerie campaign that allegedly celebrates diversity and rejects gender stereotypes. The campaign was created by Badger & Winters, a shop that recently generated press when it “made a commitment to never objectify women in our work.” Um, does depicting beautiful models wearing nothing but lingerie really support the commitment? Give Naja founders Catalina Girald and Gina Rodriguez credit for not choosing a standard White advertising agency to handle the campaign. At the same time, how diverse and inclusive is Badger & Winters?

Work by Badger & Winters features a diverse cast of women

When Catalina Girald saw Olympic gold medal-winning gymnast Gabby Douglas compete in the 2012 Summer Olympics, it sparked an interesting product idea. Girald, a former gymnast, herself, was taken aback by the fact that Douglas, who is African-American, was wearing a “nude” ankle wrap that didn’t match her skin tone.

“I wore ankle wraps many times and hadn’t ever thought about the fact that they don’t make them in other colors. It made me realize that ‘nude’ is not ‘nude’ for everyone,” Girald said.

Two years later, when Girald launched her lingerie company, Naja, she kept that idea in mind. Today, the company is debuting ads on New York’s subways for Nude for All, its new lingerie line that’s available in seven shades of nude for every skin tone. The ads feature 10 racially and ethnically diverse women who all have varied, and accomplished backgrounds, including a soloist for the San Francisco ballet, a software engineer and a Harvard Business School student. Naja plans to post the women’s stories on its website and social media channels later this summer, and expand the campaign to include more outdoor ads in other cities.

Also appearing in ads for the lingerie is Jane the Virgin star Gina Rodriguez, co-founder of Naja. How Girald and Rodriguez became business partners is a story in itself. Right after she started Naja, Girald was approached by Procter & Gamble to appear in a video series showcasing up-and-coming Latinas, where she met Rodriguez, who also appeared in the videos.

“At the time, Gina and I were the only two people who really weren’t up-and-coming,” Girald said. “I had just started the company, and she didn’t have the part on Jane the Virgin yet. We were both struggling artists, and we became friends. Eight months later, she won the Golden Globe, so I asked her to help me launch the nude lingerie, and she loved the idea.”

The campaign was directed by Badger & Winters, whose co-founder and chief creative officer Madonna Badger is fighting sexism in advertising through #WomenNotObjects, an effort to combat ads that objectify women.

“I’m still bothered by the fact that most lingerie portrays women as sexual objects, and I wanted to change the way that lingerie is advertised to women,” Girald said. “I saw an article in the New York Times about #WomenNotObjects, and it resonated with everything I was feeling, so I reached out to them.”

“The happy creative helps to drive home a more serious message about diversity,” Girald said. “We wanted to make people smile, and then, make them realize that there’s a broader issue here. You see the race and ethnicity issue more than anything.”