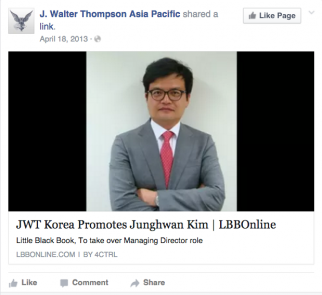 Advertising Age reported JWT in Korea is undergoing a corporate overhaul after its top executive resigned as a result of a corruption probe involving bribing clients. Hey, maybe multilingual global citizen Gustavo Martinez is available to replace the Korean crook.

JWT is getting a new structure in Korea after its top executive there was targeted by a corruption probe.

Junghwan Kim, who was managing director until February, resigned in connection with an investigation by the prosecutor’s office. Korean news reports say he was arrested amid allegations he set up slush funds to bribe clients. Several other employees, including the finance director, have been suspended pending the probe’s findings, JWT said.

J. Walter Thompson said Friday that its Asia Pacific branch will set up a new unit in partnership with Y&R Korea, another WPP agency. It will use the J. Walter Thompson name but will operate within Y&R, according to a statement from the agency’s Singapore-based regional headquarters.

The JWT Korea agency had about 80 employees. Staff handling multinational accounts would move into the new structure, while other employees would be laid off, the Kukmin Libo newspaper reported.

When news of the probe broke in March, the agency said it was cooperating fully with Korean authorities, had hired external auditors and was conducting an internal investigation as well. All WPP employees are required to take anti-bribery and anit-corruption online training, and senior executives have to sign a WPP code of business conduct every year, according to WPP’s web site.

Mr. Kim had been with the agency since 2004 and serviced accounts including tobacco and ginseng company KT&G.