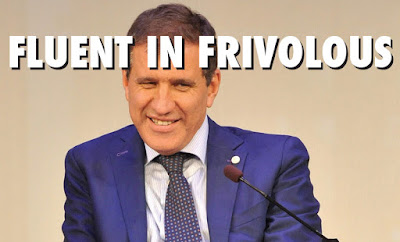 1. characterized by lack of seriousness or sense: frivolous conduct.

Based on the definition, if Johnson’s charges are indeed frivolous, it appears that JWT, WPP and Martinez have overreacted with extreme seriousness and sense of purpose.

After all, Martinez saw fit to resign his global position.

Meanwhile, JWT and WPP immediately replaced Martinez with a White woman—Tamara Ingram—who instantly declared, “Top of my agenda is diversity and inclusiveness.” Ingram followed up by creating a Diversity and Inclusion Council and partnering with inQUEST, a diversity and inclusion consulting firm. Plus, Ingram is establishing a hotline for whistleblowers, which is unlikely to attract callers considering the way JWT and WPP are now treating Johnson.

Additionally, while the motions might be valid from a strict legal perspective, the documents feature a few items that border on being frivolous, in terms of lacking seriousness or sense. Adweek wrote, “According to the document, the ‘alleged racist and anti-Semitic comments referenced in the Complaint’ also ‘have no bearing on [Johnson’s] retaliatory harassment claim’ since she is neither Jewish nor a minority.” Does this mean White people cannot feel threatened by alleged anti-Semitic racists? BTW, did the lawyers conduct DNA and genealogy investigations to conclude Johnson is free of any Jewish or minority ties?

Adweek also wrote, “The argument holds that, while Martinez’s conduct as alleged may have been ‘offensive,’ it was not illegal because ‘Courts have repeatedly held … that a few sexual or racially-charged comments do not create a hostile work environment.’” Perhaps, but in an industry with a long history of sexual harassment and racial/ethnic discrimination, such alleged behavior receives heightened responses—as demonstrated by the aforementioned reactions from JWT, WPP and Martinez. It could be argued that Martinez’s alleged remarks and behavior fueled an already hostile work environment.

In the end, there’s a lot to dismiss in the motions to dismiss. But that’s to be expected when corporate lawyers team up with advertising agency executives. It’s Tommy Flanagan meets Joe Isuzu.

That suit, which inspired headlines around the world, led now-former JWT global chairman and CEO Martinez to resign one week after it was filed. He was immediately replaced by WPP chief client team officer Tamara Ingram.

Today’s filing by Davis & Gilbert LLP, the firm representing JWT and its parent company, urges the judge to dismiss the case on the federal, state and city levels. The 30-page document argues that Johnson and her legal team have failed to prove that she suffered any sort of “materially adverse” consequences due to Martinez’s behavior, which allegedly included racist and anti-Semitic statements, incidents of sexual harassment and at least one rape joke caught on camera during a 2015 meeting with employees and client representatives at a Miami hotel. It also claims that accusations of Martinez retaliating against Johnson for raising concerns about his behavior to the agency’s global chief talent officer Laura Agostini are baseless.

The document calls Johnson’s amended complaint alleging violations of the federal Equal Pay Act and Section 1981 of the Civil Rights Act forbidding discriminatory behavior by employers “frivolous.” It also argues that she used her relationships with various media outlets to further publicize her case and that a text message sent to Martinez just over a week before her legal team let JWT and WPP know that a suit would be filed disproves her claims about being subjected to a hostile work environment.

In that text, Johnson allegedly told Martinez that she had rejected a job offer from another agency “because I am loyal to you and what you are doing,” adding, “I felt like we had a good year together. So I hope I wasn’t wrong to stay. Lol”

The filing also states that Johnson’s claims regarding “her alleged reduced 2014 bonus” cannot be validated because the reduction of that bonus occurred “before she complained about her bonus in ‘late April and early May 2015,’ and before she allegedly complained in May 2015 about Martinez’s racist comments.” It further states that Johnson never clarified as to whether Martinez was made aware of her complaints regarding the aforementioned comments and that she therefore has no direct evidence that his actions were made in retaliation against her.

The filing claims that Johnson mentioned “virtually nothing supporting a hostile work environment claim” during the nine-month period between May 2015, when Agostini told Johnson she would investigate the claims made against Martinez, and the day in February when Johnson and her legal team let the companies know that a suit would be filed.

Regarding the implication that Martinez’s behavior created “a hostile work environment” for Johnson (which serves as the subject of her state and city-level claims), the filing argues that many of the incidents in question are “irrelevant” since they occurred before she “purportedly engaged in protected activity,” meaning activity that happened after the first formal complaints were made against Martinez in May 2015. According to the document, the “alleged racist and anti-Semitic comments referenced in the Complaint” also “have no bearing on her retaliatory harassment claim” since she is neither Jewish nor a minority.

Johnsons’s initial suit stated that, after she told Martinez that his rape jokes were inappropriate, he told her to “come to him so he could ‘rape [her]’ in the bathroom.” But today’s filing states that such incidents do not amount to sexual harassment because her complaints contain “no allegation that he actually talked about ‘the sex.’”

The argument holds that, while Martinez’s conduct as alleged may have been “offensive,” it was not illegal because “Courts have repeatedly held … that a few sexual or racially-charged comments do not create a hostile work environment.” The document goes on to cite various cases that included “more offensive” behavior but were not ruled to have created such an environment since they were “petty” and, in several instances such as the Miami meeting, were not directed at Johnson herself.

According to the filing, any adverse consequences Johnson suffered for filing related complaints—including the reduction of bonuses, the removal of certain duties from her schedule and her exclusion from executive meetings—amount to only “minor annoyances” that cannot be considered retaliation by her employer. “Not only did Johnson remain as Chief Communications Officer,” the document reads, “but she fails to allege how losing these minor duties adversely impacted her job.” WPP’s lawyers also argue that Johnson failed to prove definitively that Martinez slashed her 2015 bonuses in response to the complaints she made against him and that her request to be placed on paid leave following the suit’s initial filing “belies any claim that such leave is materially adverse.”

Finally, the document argues that the claim that these allegedly retaliatory acts “dissuaded Johnson from complaining” or otherwise affected her ability to do her job is disproven by the very filing of her suit.

Lawyers for Martinez himself, who hired a separate firm after resigning from his job, also filed their own motion to dismiss Johnson’s claims today.

As predicted, the nice white ladies at the 3 Percent Conference took one look at the lawsuits going on now, glossed right over the racial discrimination issues, and left intersectionality in the dust.

WPP is sending a message loud and clear.

"We're going to go after this white female exec so hard, imagine what we'd do to destroy anybody ethnic who tries the same kind of discrimination lawsuit."

"Oh, wait, you don't have to imagine. If you're of color, you can probably name all other minorities we've done this to through the years, even when they had proof in writing or on tape, and who got shoved out the industry door never to return as a result."