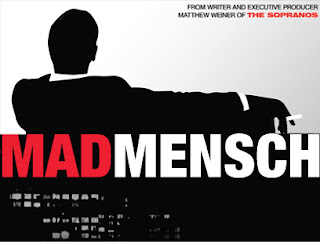 The sixth installment of AMC series Mad Men continued to ignore the existence of non-White minorities, although Don Draper’s wife spent a moment discussing the primitive nature of pygmies.

A lipstick client led to a focus group of the office “hens”—setting the stage for frat boy humor, condescending male chauvinism and ho-hum hokum.

An Israel tourism client inspired plenty of Jewish-related silliness. Deciding that people in Israel are uncommonly beautiful, one adman proclaimed, “The Jews there don’t look like the Jews here.” Seeking insight and enlightenment, Don Draper proceeded to read Leon Uris’ Exodus, and he also initiated a lunch date with the Jewish retail store client to probe her for insider secrets. Of course, this stimulated introspective lecturing, melodramatic whining and navel-gazing on all sorts of taboo topics. Additionally, Draper’s wife admitted the first boy she ever kissed was a Jew. Oy vey—such scandalous revelations!

The stereotyping in Mad Men just doesn’t feel, um, kosher.
Posted by HighJive at 7:09 AM

I wonder what would happen if you had a product or some work and you put it up to a focus group of ten 22 year old women. Let them come in texting in their yoga gear and lip gloss. Then sit behind a one way mirror and see how long it would take for you to start making sexist and superior comments. Then if one of them had a good idea? You'd be floored. I think the show is brilliant. And I thought the israel thing became about Don being in exile from his family the same way Joan and Roger have an affair and nothing more. Maybe I'm just looking for different things than you.

i think you're really missing the point here. the show is a commentary on the racism and sexism of the early 60's - it's not condoning it. when the characters speak and behave that way, you're supposed to cringe and see their behavior in a plain light... and it should influence you to notice that behavior around you today, as well.