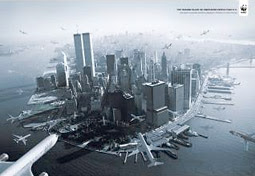 Just when it looked like the streak of insulting shit from Draftfcb would propel IPG into a commanding lead for most offensive advertising network, Omnicom has catapulted back into the race with an extraordinary display of insensitivity from DDB Brasil. In an ad for the WWF, the Omnicom shop presented a fleet of jets hurtling toward New York City à la September 11. A Gold Pencil goes to anyone who can explain what the image has to do with endangered pandas.

During the recent Microsoft Polish Photoshop® scandal, ad critics naively wondered how a major advertiser could allow such a mistake to happen—as if a global corporation can police every marketing maneuver executed on its behalf. Yet applying this line of reasoning to the WWF ad might cause one to consider the culpability of DDB Worldwide Chairman and Chief Creative Officer Bob Scarpelli or Omnicom President and CEO John Wren. Perhaps Bob Garfield will write another Dear John letter.
Posted by HighJive at 12:03 AM