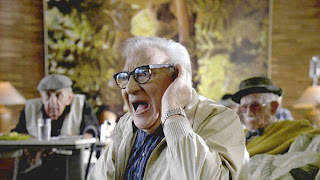 In TV ads, dumb has become the new clever

Why do commercials have to feature dumb boyfriends and stupid oldsters?

That’s not necessarily such an obvious choice in the world of TV commercials, where a subspecies of addlebrained humans thrives. They’re usually guys (but not always), and the message that seems to be coming from many such commercials is: “Idiots and jerks buy our product. Unless you’re too good to act like a buffoon or pick on the defenseless, you stuck-up snob you, you’ll buy what we buy to be just like us!”

They’re guys who show disrespect to their girlfriends with overt, head-turning ogling of bikini-clad women walking past them on the beach.

They’re campers pranking a giant (possibly mythical) forest-dwelling creature who could tear them limb from limb.

In one case, it’s a lad so brand-conscious he spends his early life showing eye-rolling rudeness to his parents over not-the-right-brand purchases until, at last, as an adult, he ventures into a showroom without their meddlesome advice to buy the proper brand of sporty luxury automobile.

Perhaps we’ve evolved from the era of advertising pioneer David Ogilvy, who said: “The consumer isn’t a moron. She is your wife.” Or maybe someone figured out that wives are amused seeing men portrayed as a species of doofus familiaris.

Since Ogilvy died in 1999, we turned to Jack Rooney, president of Ogilvy & Mather’s Chicago office, for comment on this approach to advertising. We found that he doesn’t like it.

“Why do you reinforce the most sick stereotypes?” Rooney said. “When you run an ad, you are advocating for something.”

Too bad the creators of an ad for a compact car didn’t get that advice. They decided that the best way to promote good fuel economy was via a group of irritable seniors. While they view a TV commercial within the commercial, one senior mishears “42 miles per gallon” as “42 wild Italians.” Others start shouting over each other trying to explain to the first what they heard, and in the end, a helpful young candy striper, who tries to let them know what was really said, gets sent scurrying with a resounding “Who asked you?”

They probably never heard the story of two back-bench members of the British Parliament whispering about Winston Churchill becoming senile late in his life. As the story goes, Churchill turned to them and said, “And they say he has gone deaf as well!”

The reputation of older people also gets a poke in the eye from a hummus maker. The ad opens with a young woman entertaining some friends with their chickpea and olive oil concoction. She seems pleasant and is modestly dressed in a knee-length red dress. Looking for her grandmother’s approval, we cut to the old country where grandma declares that granddaughter is dressed like a prostitute.

How is that supposed to make us hungry for hummus? It leaves me a little queasy.

And what’s with the angry older people? Maybe they’ve been watching too much TV and spotted these commercials. That could leave people of a certain age a bit miffed.

It’s amazing what passes for wit in the 21st century.

Of course people have been suspicious of commercials since their beginning. Anne Saint Dreux, founder and director from La Maison de La Pub (House of Advertising) in Paris, will visit Chicago for a short presentation (in English) on Wednesday at the Alliance Francaise de Chicago about the “Strategy of Emotion” in commercials. Following her talk will be a screening of classic commercials that examines the changes in language, trends and techniques through the years, as well as iconic advertising ranging from Marlboro to Chanel and Coca-Cola to Dior.

“If you consider the real object is to inform that there is a product for sale at a price. Advertisers need to sell one more, so they try to intermingle with our thoughts, even with our subconscious,” she said. “When you want to seduce someone, you have to bring a little emotion. Through humor. Through glamour.”

She said she hoped the recent flurry of silly or mocking commercials will be a short-lived trend that will soon fall to more clever rivals, and not become the new norm. “Soon they will look for a new way to be different,” she said.

One hope remains for the characters in commercials featuring buffoonery. There seem to be a few precocious infants who have learned to talk and use various electronic devices to maintain stock portfolios, even while confined to a crib. Perhaps they will grow up to be wise and intelligent adults who appear in TV ads. Then again, they’ll probably end up riding the family dog like a little horse — as they say in the commercials.
Posted by HighJive at 4:52 PM