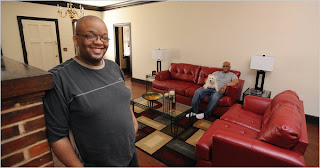 By Sabrina Tavernise and Robert Gebeloff

WASHINGTON — The percentage of the nation’s black population living in the South has hit its highest point in half a century, according to census data released Thursday, as younger and more educated black residents move out of declining cities in the Northeast and Midwest in search of better opportunities.

The share of black population growth that has occurred in the South over the past decade — the highest since 1910, before the Great Migration of blacks to the North — has upended some long-held assumptions.

Both Michigan and Illinois, whose cities have rich black cultural traditions, showed an overall loss of blacks for the first time, said William Frey, the chief demographer at the Brookings Institution.

And Atlanta, for the first time, has replaced Chicago as the metro area with the largest number of African-Americans after New York. About 17 percent of blacks who moved to the South in the past decade left New York State, far more than from any other state, the census data show.

At the same time, blacks have begun leaving cities for more affluent suburbs in large numbers, much like generations of whites before them.

“The notion of the North and its cities as the promised land has been a powerful part of African-American life, culture and history, and now it all seems to be passing by,” said Clement Price, a professor of history at Rutgers-Newark. “The black urban experience has essentially lost its appeal with blacks in America.”

During the turbulent 1960s, black population growth ground to a halt in the South, and Southern states claimed less than 10 percent of the national increase then. The South has increasingly claimed a greater share of black population growth since — about half the country’s total in the 1970s, two-thirds in the 1990s and three-quarters in the decade that just ended.

The percentage of black Americans living in the South is still far lower than before the Great Migration in the earlier part of the last century, when 90 percent did. Today it is 57 percent, the highest since 1960.

“This is the decade of black flight,” said Mr. Frey. “It’s a new age for African-Americans. It’s long overdue, but it seems to be happening.”

Read the full story here.
Posted by HighJive at 12:12 PM