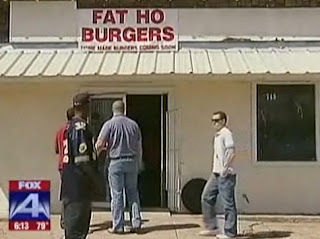 Fat Ho Burgers is stacking up the controversy.

The slangily-named burger joint made a splash when it opened in the conservative town of Waco, Tex., down the street from Gospel Café – a volunteer-run religious cafe and bookstore.

But not everyone is getting the joke.

“It’s not calling people a ho. It’s just like they say, ‘Oooh, that ho is big,’ or, ‘That ho is tight!’” she said. “Look what’s going on in Japan,” she added. “It’s like clear this world is not gonna get any better. Why cry and be depressed? The economy is bad. Somebody gotta keep a sense of humor around here.”

She said the name came to her while she was watching a movie.

“I was watching ‘Phat Girlz’ … and they had like a fat a—burger and skinny a—fries,” she told KWTX.com.

Luckily for Evans, the publicity surrounding her controversial burger joint has reportedly been great for business. On Wednesday, the cash-only business ran out of cash – and the its supply of beef, KWTX.com reported.
Posted by HighJive at 4:06 PM