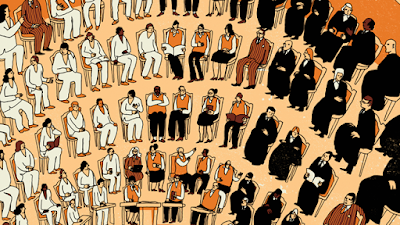 Adweek published the latest example of diverted diversity from The Advertising Club of New York President and CEO Gina Grillo. Although Grillo opened by stressing the need for inclusive juries for advertising award shows, she ultimately focused on ADC’s 50/50 Initiative, an effort to promote White women in the field. Pointing to advertisers making gradual product changes to demonstrate social responsibility, Grillo declared, “Diversity initiatives must be tackled in a similar fashion—bravely and incrementally.” Sorry, but “bravely and incrementally” sounds like an oxymoron. There’s nothing brave about jumping on the White women bandwagon and proclaiming the act symbolizes progress. And it’s pathetic to view such faux victories as incremental when minority representation in the industry is actually declining. Grillo insists that juries must become more diverse in order to make awards legitimate. Agreed—but simply increasing the number of White women judges is not a legitimate solution; rather, it’s just another smokescreen.

Is it a coincidence that both the entertainment and advertising industries are facing a diversity crisis on their awards juries? Probably not. Both of these industries, which champion and celebrate creative work, share a history of not having many shifts in power.

But as culture and the demographic makeup of this country continue to evolve, so too must the driving forces of creative industries if we’re going to remain relevant. To truly recognize creative achievement without bias, we must take a hard look at the construction of our juries and implement systemic changes to ensure all creatives are given opportunity and credit.

When the Academy of Motion Picture Arts and Sciences took quick, decisive steps to respond to the criticism of #OscarsSoWhite earlier this year, it showed the world that change can’t always happen all at once, but it won’t happen at all without action. By thinking in incremental, strategic terms about what we can do to affect change on our juries and awards shows in advertising right now, we can start creating bigger, lasting long term results.

As I’ve spent the past few weeks gearing up for our 52nd annual International ANDY Awards Show & Party tonight, I couldn’t help but reflect on how the validity and relevance of creative awards shows have come front-and-center into our industry’s consciousness.

For starters, we must hold ourselves accountable and admit that there is legwork to be done when it comes to diverse jury members. Specific industry organizations have recently come under fire for all-male juries. There’s room for improvement all over the industry, but there are also plenty of signs that our leaders are motivated to change—case in point, the Art Director’s Club’s 50/50 Initiative. The ANDYs have pledged a similar effort towards a jury that is 100 percent inclusive with an emphasis on women and cultural diversity.

Of course, there is also work to be done beyond the issue of gender diversity, and we must look to lead the industry by building a truly inclusive jury that represents people from varied backgrounds, races and sexual orientations. The excuse that it is hard to find people that represent these groups is hard to believe. This only halts progress by keeping the status quo in place. To address this head on means we need to be brave enough to sponsor and promote talented up-and-comers from the middle and give them a chance to progress through the ranks.

We can also learn from other industries. For example, many companies in the food business are moving towards a healthier norm—a movement that was led by a few conscientious brands who successfully created a cultural shift.

Last year, General Mills made a pledge to remove 90 percent of artificial flavors from its cereals by the end of 2016, including iconic lines like Reese’s Puffs and Trix. It knew it would take small steps over two years to enact this kind of change and that it was important to take the time to ensure the cereals tasted and looked great. The company also pushed a broad-reaching campaign on the issue—a bold act of bravery, indeed.

Meanwhile, in hopes of reducing its carbon footprint, HP made a commitment to reduce its greenhouse emissions by 20 percent by 2020. Since creating the initiative in 2005, it has created short and long-term initiatives that it has implemented internally and with outside partners, ultimately helping the company reach its goal two years ahead of schedule.

Diversity initiatives must be tackled in a similar fashion—bravely and incrementally. But in the long run, we cannot simply enforce diversity—it needs to happen organically, at the place where the talent pool is created and nurtured. Those involved in the hiring process must shift their focus toward bringing in diverse talent, and new processes will need to be created in order to ensure that we’re not just attracting the right people, but retaining them by creating a culture that openly embraces and champions diversity. By evolving our culture in this way, we can create the conditions for lasting change.

For real change to take hold, this talent will need support, such as competitive compensation, mentorship programs, awards and recognition, and career development opportunities that will help them climb the leadership ranks. For our part, the AD Club is pledging $100,000 to provide diverse female professionals access to key industry conferences that they would otherwise not have access to and that will support their careers.

As daunting as this all seems, it is a lot more daunting to do nothing. The next time you are in a position to hire, promote or train someone, make a concerted effort to be inclusive. It is the one investment that will provide relevancy for decades to come.

The vitality of our industry can only happen in earnest when we are brave enough to invest in the talent that represents the cultural shifts of our society.

So Gina Grillo is the President of the ANDY Awards, stuffed her jury full of white women and foreign men, NOBODY BLACK, and then wrote an article about the importance of diversity in juries?

American advertising is doomed to endless circles of hypocrisy and diversity = white women until everyone leaves the building and heads to other industries.