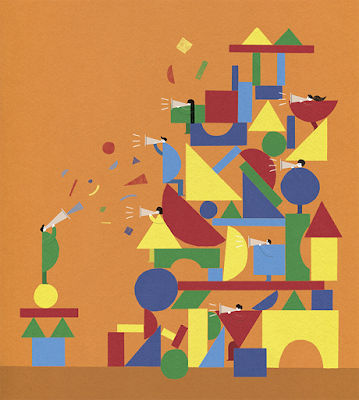 Adweek published the latest diverted diversity dreck from 4As President and CEO Nancy Hill, who insists the “discourse about gender and diversity in advertising is reaching a crescendo.” Not sure if Hill actually wrote the line or if it’s the work of an Adweek editor, but the words are only valid if the writer means a gradual, steady increase in loudness or force as applied to a fart. That “gender” precedes “diversity” in the dreary discourse says it all. According to Hill, people have approached her to gush, “This is what I am going to do to make a change.” Of course, Hill offered no clues regarding exactly what anyone is going to do to make any changes. And the 4As leader ultimately presented the same old smokescreen solutions and crescendo of culturally clueless clichés. Hill closed by declaring, “It’s why I am confident that this time is different.” Yes, this time White women are dominating the diversity drivel. (Not surprisingly, the illustration for the Adweek article—depicted above—exclusively features White women.)

Discourse About Gender and Diversity in Advertising Is Reaching a Crescendo

But real change starts at the top

It’s been nearly a month since the 4A’s Transformation conference, where, as many of you heard, read or experienced firsthand, the discourse about gender and diversity in the advertising industry was raised to a new level. We have now reached an inflection point in the conversation: More people than ever are engaged, which is exactly what it’s going to take to make significant and meaningful change.

This time, I am confident agencies and their leaders—men and women alike—are going to take action to ensure that our industry better reflects the population.

The comments I received at Transformation and after the event have been moving, to say the least. One reason I know this time is different is that people have been taking it upon themselves to come directly to me and say, “This is what I am going to do to make a change.”

We at the 4A’s are engaged in numerous initiatives to support gender equality and diversity—from the Glass Ladder series, designed to empower and educate female leaders, to our MAIP multicultural mentorship program.

The objective is threefold: to keep the conversation front and center, to hold a mirror up to agencies regarding female and diverse experiences and to offer programs that advance the careers of female and diverse agency professionals.

As part of the initiative, we will be commissioning comprehensive research to provide insight into how women are treated and rewarded at agencies and portrayed in advertising. The first part of the two-part survey will examine female experiences in the industry as they relate to equal pay, equal opportunities for advancement and sexual harassment, among other topics. The second part will look at how women are portrayed in ads and the impact on current and future generations of women.

We expect the findings to be comprehensive and informative with the goal shaping how the conversation about gender and diversity in the advertising industry progresses.

But real change needs to take place within agencies, and it has to start at the top.

As I mentioned at the conference, if you are a CEO, you are also the chief diversity officer. And you need to look at every hire as an opportunity to change the playing field at your own company.

Here are a few places to start to take action:

Revisit your hiring process. Following Transformation, one CEO at a large, independent agency approached me and said, “From now on, I’m not looking at any resume that has a name on it.” Blind applications are one way to help erase unconscious biases when it comes to hiring (or not hiring) female or diverse candidates. Another option is to institute the Rooney Rule and mandate that whenever you’re hiring for an open position, the slate of candidates must be diverse.

Close the wage gap. Look at your staff’s salaries. Is there a gap between what men are making and what women are making? If so, I urge you to fix it if you want to retain and nurture some of your agency’s best talent.

Open the discussion. Make sure your HR department is receptive and reactive to employees’ feedback. “If you see something, say something” shouldn’t just be a slogan on the New York City subway. If you see colleagues, friends, bosses or junior staffers being treated unfairly because of their gender, race, ethnicity, physical ability or any other reason, raise a flag. This is unacceptable behavior, and each agency should have a process in place to address it without making employees fear for their jobs.

I’m encouraged by the progress we’ve made in just the few short weeks since this discussion came to a head. Nancy Reyes became the new managing director at TBWA\Chiat\Day’s New York office, and less than a week into her job as JWT’s new CEO, Tamara Ingram declared her intentions to make diversity a top priority.

This is an industry I fell in love with more than 30 years ago. There is so much good, so much creativity and so much innovation that flows through its veins. I know you all have a passion for this industry as well, and that’s why I’m confident that we’ll do the right things together and move this industry forward.

It’s why I am confident that this time is different.

Nancy Hill (@nhhill) is president and CEO of the 4A’s.

Until someone steps up to the plate and sets some actual numbers down, this is just more of the same. An organization / "leader" / agency / holding company (take your pick) blowing wind that wins them the SEMBLANCE of being a pro-diversity warrior (at least in the press), when NOTHING IS BEING DONE OR CHANGED AT ALL.

4As talk, but nothing is going to come of it. They'll keep writing editorials and Tweeting about the "importance of diversity" but they'll never get behind releasing hiring numbers.

Most likely thing to happen is they'll self-refer back to their own editorials on diversity, to show the industry's overall commitment to diversity.

Beyond that? 4As will probably support 3% Conference to get gender (not ethnic) stats at individual agencies.

It would be so easy for them to take a real stand and ask for hiring numbers, but the risk is that those numbers are as bad as what POC have been saying since the 1960s.

I'm not sure if the Rooney Rule is going to work in advertising, having been through something like that myself in the industry.

When you give frat bros the chance to determine who's hired (we all know HR is only there for the appearance of legality), and they're forced to look at or talk to a minority just for posterity's sake, the only thing that happens is the minority (10 times out of 10) expends energy and money to get to the final stages only to have frat bros hire frat bros.

What you'll see is an uptick in people of color getting to talk to agencies, but the diversity hiring plan will default to frat bros hiring white sorority women if their hand is forced.