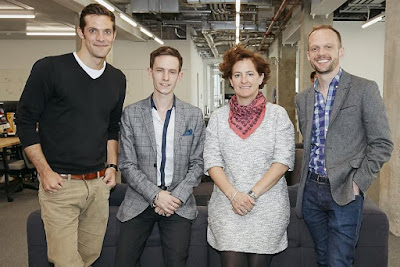 Campaign reported on promotions at Ogilvy Pride, the LGBT shop in the Ogilvy family. Ogilvy and WPP likely use the enterprise to boost the holding company’s global diversity figures—establishing WPP as perhaps the most diverse example of diversity of any single organisation. Yet based on the photo above, is there any racial and ethnic diversity at Ogilvy Pride?

Ogilvy Pride, the LGBT agency in the Ogilvy Group, has unveiled its senior team after hiring a new head and two deputies.

Sam Pierce, the global business partner for Ogilvy & Mather Advertising, joins as the head of Ogilvy Pride. He has been tasked with the overall leadership and to drive commercial opportunities.

Having joined Ogilvy & Mather in 2008 as management supervisor, Pierce became the worldwide account director in 2011.

Ogilvy Pride was launched to help clients aim their ads at LBGT consumers and help brands reach a wider audience worth £1.9 trillion globally, the agency said.

Michael Breen, the digital account director at Geometry Global, and Alex Canthal, a business director at O&M, have joined as joint deputy heads of Ogilvy Pride.

Breen has been asked to focus on “external promotion and networking” while Canthal will work on thought leadership, including setting up a Pride think tank.

I feel like discussions of white women in advertising will give way to white LGBT now.

In the end diversity will still mean anything but ethnic diversity. That has to wait patiently at the end of the line, several years from now to get addressed.

I've worked at a lot of places where there were plenty of out and proud men and women in advertising. Especially in creative departments.

But there was rarely anybody of color in those same departments, and discussions about race or racism were shut down fast.

Some things are more acceptable on Madison Avenue than others.