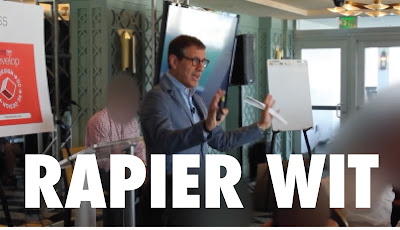 Advertising Age, Adweek and AgencySpy presented access to the infamous redacted video of former JWT Worldwide Chairman and CEO Gustavo Martinez joking about rape during an agency meeting. Of course, comments at the sites included the obligatory perspectives from idiots whining about political correctness taking the fun out of everything—as well as the morons expressing outrage that Martinez’s monologue led to his job loss. First of all, keep in mind that Martinez was not terminated; rather, he resigned. Second, the video is not the sole evidence representing the charges against him. In fact, his filmed attempt at comedy might be the least nasty act he’s accused of executing. Third, if a politician made similar remarks, he’d face resignation. If the CEO of an advertiser made similar remarks, he’d face resignation. Hell, if a JWT mailroom attendant made similar remarks, he’d be fired. Or at least sent to sensitivity training courses. Was Martinez displaying unconscious bias or conscious racism with his jokes—or cultural cluelessness and stupidity at least? Yes to cultural cluelessness and stupidity. Plus, he displayed ignorance about the concept of comedy killers. As for unconscious bias or conscious racism, well, the jury has not yet been selected to rule on that.

Those comments left there are perfectly indicative of my time in advertising. Past, present, future. It's ongoing.

Now a white woman is learning the hard way that if you speak up about some seriously racist/sexist practices, first thing that'll happen is you get called a liar.

Second thing is even if you have proof, right there in people's faces, the frat boys in advertising will find a way to discount it and pick it apart and minimize it.

I mean my god, if even the issue of rape (with a video of the guy in question saying it on camera as proof) can be dismissed as "Well it wasn't RAPE rape he was talking about," or "You are just too oversensitive," imagine what it's like NOT being a white woman in advertising, and being an actual minority.

Erin is afforded a relatively higher platform of believability and trust by virtue of her role and being white, and she's still getting treated like that. The rest of us who haven't achieved next-to-C-Suite level and aren't white have no chance at all.

“So 10 years ago we embarked on diversity and inclusion being a core part of the DNA at IPG.”

10 years ago IPG got caught in racism accusations and they then spent a decade hiding and obscuring their tracks by hiring useless diversity execs with no hiring power, setting up their own diversity awards to give themselves diversity awards, and stuffing boards of diversity organizations with paid IPG employees to, again, GIVE THEMSELVES DIVERSITY AWARDS.