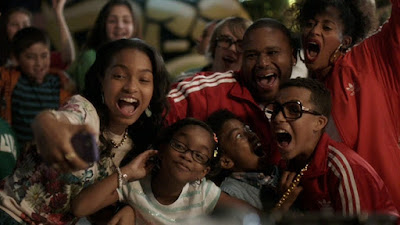 Adweek reported ABC President Ben Sherwood declared his network created “all-inclusive” programming to reflect its diverse audience; plus, ABC has worked to bring diversity to its leadership. Does the network’s commitment to inclusiveness extend to its advertising agencies?

Ben Sherwood says ABC’s programming reflects diversity not simply because it’s good business to do so but “because it’s right.”

Sherwood, the president of the Disney-ABC TV group, was the keynote speaker today at the opening of the 2016 NAB Show in Las Vegas and then took part in a Q&A with Gordon Smith, the president of NAB and a former Oregon Senator. ABC’s new entertainment president, Channing Dungey, was in the front row, seated next to Rebecca Campbell, the head of the ABC owned TV stations group.

“My predecessor, Anne Sweeney, and [former ABC entertainment president] Paul Lee set in motion choices that were based upon decisions that reflect our audience,” said Sherwood, who himself is considered a potential successor to Bob Iger as CEO of Disney. “And now with Channing Dungey, you’ll see that commitment is even greater.”

ABC dominates Thursday nights with dramas produced by Shonda Rhimes (whom Sherwood called “our Elvis” in a nod to Vegas) and has a string of family comedies featuring African-Americans, Asian-Americans and even one starring a gay teenager.

“We are all-inclusive,” Sherwood said. “In a divided nation, we speak to everyone, and our content needs to reflect that.”

Smith asked Sherwood if he bought the notion that this is still a golden age of television.

“Every era wants to have its golden age, and I think we’re in a golden moment for TV,” Sherwood said. “What is unusual about this moment is not about the talent that is making it but the technology that is used to tell a story and distribute it widely. As a democrat with a small d, I’m a big fan of that.”

When Smith asked Sherwood if he had any advice for the ABC affiliates in the room, Sherwood said, “That feels like a trick question. As a recovering journalist [Sherwood is the former president of ABC News], I would never be so presumptuous to wear the hat of our affiliate leaders.”

Sherwood is meeting behind closed doors with ABC affiliates this afternoon in Las Vegas.

OK, so we have one network out of 250+ networks doing a diversity thing. In the casting, anyway. A little bit behind the cameras but mostly in front of them.

Now we just have to wait for the other 249 networks to catch up, THEN we can start shifting the discussion from actors to crew, writers, producers, etc. of color.

Then, perhaps a few decades from now when we get all of that sorted out, we'll move down to the next level, the people controlling advertising on those networks. I'm presuming by then that the whole diversity = white women thing will be over, and we'll get a little color on Madison Ave.

Or the whole industry will collapse by then, and no meaningful numbers of people color will have gotten to earn a living working in advertising before it went south. That's also a possibility. Widescale, decades' long disenfranchisement that never gets resolved, and the ad industry disappears before any changes (beyond an influx of white women I mean) occur.