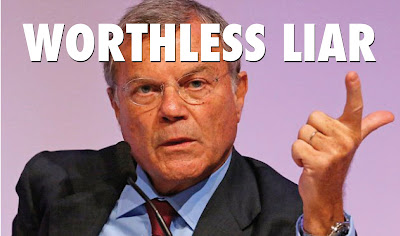 Campaign reported on WPP Overlord Sir Martin Sorrell defending his £63 million pay package during an interview at Advertising Week Europe. Sorrell’s self-defense included pointing out that the “market capitalisation of the company has grown from £8 billion to £31 billion.” Okey-doke. At the same time, the latest WPP financial report boasted about the company’s inclusiveness, declaring its workers “represent perhaps the most diverse example of diversity of any single organization.” Yet a few weeks later, Sorrell responded to the Gustavo Martinez debacle by admitting there is a problem with diversity, recognizing the representation of Blacks, Latinos and the LGBT community is “unacceptably low.” Rival holding company IPG claims that its executives with hiring power have their compensation tied to meeting diversity goals. Shouldn’t leaders like Sorrell be held to similar standards of performance? Imagine how his £63 million paycheck would shrink if Sir Moron were held accountable for the exclusivity at WPP.

Sorrell on his pay packet: ‘this is the way to do it’

Sir Martin Sorrell, the chief executive of WPP, has defended his £63 million share-linked remuneration package, saying: “I passionately believe this is the way to do it”.

Sorrell spoke about his pay during an interview with journalist Ian King at Advertising Week Europe in London today.

Answering the question — prompted by last week’s news that 60 per cent of BP’s shareholders voted against the chief executive’s £14 million pay — about whether he was paid too much, Sorrell said: “it’s philosophical.”

“I was 40-years-old and was chief financial officer of Saatchi & Saatchi, where the Saatchi brothers were letting me do pretty much whatever I wanted to do.

“But my dad had always said to me “find an industry you like, go into a company and build a reputation…where people respect what you do and then, if you feel like doing something on your own, start a company.”

“So I borrowed some money against my Saatchi & Saatchi stock invested [in 1985] in a company called Wire & Plastic Products… which was capitalised at £1 million.

“[…]Maybe because I’d gone to HBS [Harvard Business School] and spent two years looking through case studies of what the chairman or chief executives should do and why, I’ve always tried to do things on scale.

“…I invested what was a lot of money for me and bought 16 per cent (my partner got 13-14 per cent) and the rest is history. Today the company is worth £21 billion […] But I have taken a significant degree of risk over those 30 years. I have built up a substantial stake in the company […] it’s 2 per cent and its worth — if you do the maths — a considerable amount of money and its where most my wealth is. This is an entrepreneurial endeavour.

“This in my view […] is different and I passionately believe that this is the way to do it. I’m not a Johnny-come-lately picking a company up and turning it around. It’s been 31 years and it has offended all the investment wisdom.

“…I can’t comment on other situations… In the last five-year iteration, our share price has gone from 665p to 1,645p. If there’s a problem then it’s a problem that market capitalisation of the company has grown from £8 billion to £31 billion.”

He lost me at calling his holding company "perhaps the most diverse example of diversity of any single organization.”

That's when I knew not just some, but all words out of his mouth were boldfaced lies.

Every time I see these holding company head's earnings go up and their salaries go up I get an even more sinking feeling. It feels like there's no winning. They get caught redhanded running strings of companies all filled to the brim with racism and sexism, even caught on camera, and they only fail upwards and get rewarded with more money and more acclaim and diversity awards.

It's enough to crush a person's soul.

I'd be happy with forcing them to reveal EEO-1 data down to the tiniest detail in America, and then being AUDITED so they don't keep doing the shady sidestepping I see around me all day, every day (claiming white women as multicultural, claiming hiring on an entire company in Mumbai suddenly equals diversity, claiming Black and Latino janitorial staff is the same as a Creative Director, claiming a white guy fresh off the plane from Portugal equals diversity, etc.).