14398: Intel Agency Inside Goes Inside Out Instantly. 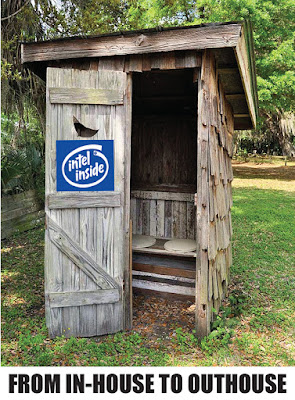 Adweek reported Intel is incinerating Agency Inside, its in-house unit. Launched in 2015, the technology company hyped the division a lot, with Intel Vice President and Global Creative Director Teresa Herd explaining how to build an in-house agency in Advertising Age just last August. Oh well. Perhaps she’ll provide a follow-up on how to dismantle such enterprises, as the move apparently led to layoffs for up to 50 employees. Adweek wondered if Intel’s White advertising agencies will snatch up absorb the work handled by Agency Inside. Hey, Intel should stage a sprinting competition for the extra business.

Nearly all employees have been laid off

Silicon Valley tech giant Intel has laid off all of the creative and production staffers at Agency Inside as it prepares to focus the in-house hub it launched about three years ago only on account services, according to Teresa Herd, vice president and global creative director at Intel.

Herd added that the company is reorganizing its in-house operations to focus on working more closely with external agency partners, cutting all creative and production staffers earlier this week. According to people with direct knowledge of the matter, those cuts amount to 30 to 50 employees. Those sources indicated that Intel will likely retire the Agency Inside name.

Herd, who built the in-house hub in 2015 and has been overseeing it ever since, declined to confirm the amount of employees cut or whether the Agency Inside name will remain.

“Agency Inside was founded to tell the brand’s untold stories to consumers and to bring brand awareness on a global scale,” Herd said. “As Intel’s business has evolved and expanded, it is recalibrating its focus to marketing to the ecosystem. If telling brand stories won’t move business in the ways that Intel wants it to move, then the org’s focus as it stands today no longer fits into the overall marketing concept.”

She added that Intel will likely “shift away from wide-scale brand and business-to-consumer marketing” going forward and instead focus “on particular audiences.”

Herd and former Intel CMO Steve Fund, who left the company in July, both joined Intel in 2014 from Staples, where Herd was vice president and global creative director for 14 years. One person close to the business said Fund was a big proponent of in-housing creative work and led that approach at Staples, where he was senior vice president of global marketing, and then at Intel.

Together, Herd and Fund brought 60 to 70 percent of all Intel’s marketing efforts in-house through Agency Inside, leaving primarily only broadcast and business-to-business marketing to external partners.

Intel currently works with several external agencies including mcgarrybowen on lead creative, TBWA on B2B marketing and Dentsu Aegis Network, which picked up the company’s global media account in October. When contacted by Adweek, all of the agencies deferred to the client.

It is unclear if any of these organizations will pick up additional work now that Agency Inside has closed.

Intel has yet to name a new CMO. The company also forced out CEO Brian Krzanich in June after an internal investigation uncovered a personal relationship with an employee.