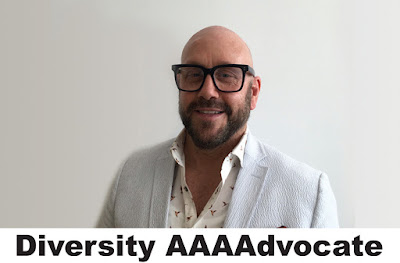 Adweek reported the 4As hired Simon Fenwick to serve as EVP Talent Engagement and Inclusion. In his previous role, Fenwick oversaw recruitment and diversity initiatives at Facebook—that bastion of inclusion. Prior to Facebook, Fenwick held talent and diversity positions with IPG Mediabrands and Starcom, more dubious diversity devotees. Oh, and he’s only been in the U.S. for about 14 years. Given the industry’s current climate, it’s amazing the 4As didn’t hire a White woman or woman of color for the job. Or maybe not.

The 4A’s has snagged Facebook executive Simon Fenwick as its executive vice president of talent engagement and inclusion. Fenwick will oversee the organization’s diversity, learning and development programs starting Jan. 2.

Fenwick’s role will span the 4A’s foundation, which includes the Multicultural Advertising Intern Program (MAIP) and the 4A’s High School Programs, the Workplace Enlightenment Certification (WEC) and the Learning Academy.

“Today, more than any time in history, people and their experiences across a connected world have become the true currency of a successful business,” Fenwick said in a statement. “As such, I believe in bringing people together to facilitate change and drive success.”

He added, “With the 4A’s being a true champion of diversity and inclusion, they’re the perfect home to help elevate people’s unique experiences to better the industry as a whole.”

According to the 4A’s, Fenwick volunteers with several organizations supporting the LGBTQ community and those that provide early career opportunities for diverse youth. Born in Kenya and raised in New Zealand and Australia, Fenwick has lived in the U.S. for the past 14 years.

He will relocate to New York from San Francisco for the new role, under which he will report to 4A’s CEO Marla Kaplowitz.

“As we continue to advocate for a more inclusive industry, Simon brings the passion, drive and experience to make that a reality,” Kaplowitz said in a statement. “From our MAIP program, which provides a platform to launch and sustain careers, to WEC, which creates safe and productive work environments, Simon will offer invaluable expertise to make the industry a better place to work.”

At this point, anything has to be an improvement over the status quo.

The current state of affairs, where the highest and sometimes only black women in the ad industry executive positions are in lame duck "VP of Diversity" roles, where they're given no tools to accomplish anything outside of sponsoring award shows and diversity luncheons for publicity photo purposes, isn't working.

Maybe the industry will finally give the foreign white guy the support, power, money and decision making capabilities they never granted his black female counterparts.