14434: Media Buying Is A Terrifying And Traumatic Experience. 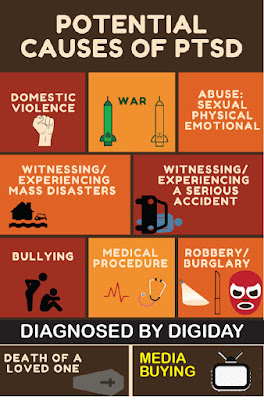 Confessions of a young media buyer: ‘I got PTSD’ might be the most ridiculous entry in The Confessions series at Digiday—which is saying a lot, given that the series has been consistently awful and patently pathetic.

I got PTSD from my old job when I left for my new one. My body didn’t know how to cope with not constantly being stressed and also being treated poorly by my boss. My old boss used me as a whipping post. If anything went wrong, I was somehow the one who got yelled at. He took all his frustration out on me. It was not fun.

Really, dude? Sounds like someone would be better suited for a career with Old Navy—sales floor, not marketing—or serving as a Walmart greeter.

First of all, PTSD is a serious condition usually resulting from experiencing a terrifying event. There might be a handful of industry figures capable of inflicting such psychological damage, but most of them have been exposed by Diet Madison Avenue and summarily fired.

Secondly, to claim a former superior “used me as a whipping post” is an improper use of a whipping post. The doofus probably meant “whipping boy”—which makes the charge even more offensive. Of course, the young media buyer will likely view this critique as a public lynching.

At Digiday, the confessors are actually crybabies.