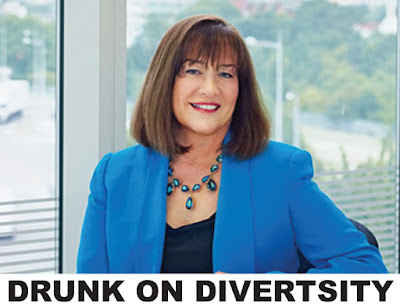 Advertising Age reported Diageo is demanding divertsity, pressuring its White advertising agencies to reveal gender figures. That’s right, the client wants to see exactly how White women are faring in the field. As for racial and ethnic minorities, well, keep walking. Sorry, but when it comes to true diversity, Diageo talks the talk, then walks away.

Diageo to agencies: We want your gender diversity stats

Liquor giant Diageo is putting more heat on its agencies to share gender equality information after a similar effort earlier this year was met with a mixed response.

Global Chief Marketing Officer Syl Saller recently sent letters to Diageo’s agencies asking for details like the percentage of women on their leadership teams, information on their gender pay gap, and how they plan to address any gender imbalances.

“Despite all of our collective efforts as an industry, the pace of substantive change has been too slow in how women are portrayed in content, how qualified women are represented at a senior level in creative development and how women are selected to be creative directors on content,” Saller stated in the letter, according to an excerpt shared by a Diageo spokeswoman. “We need to make faster progress and the time for action is now.”

Diageo began asking for gender diversity information earlier this year, Gráinne Wafer, global brand director for Baileys, said in July during an appearance at the Diversity in Marketing & Advertising Summit in London. But Wafer said when she started seeking the information she was “met with some blank faces,” according to coverage of the summit by The Drum.

“Some people are able to say ‘I know exactly what it is, here’s ours.’ Or ‘we’re not there yet but we have a plan’. That’s all I want to hear. That you have a plan,” she said, without naming specific agencies, according to The Drum.

Saller’s letter appears to be a way to put more pressure on the agencies to cooperate. While the letter sends a strong message, Diageo at this point has not laid out any specific targets or outlined consequences for shops that are not living up to gender diversity expectations, the company confirmed.

Beth Wade, global chief marketing officer at VMLY&R, said in an emailed statement to Ad Age: “Like Diageo, we strongly believe diversity enables better creative and more effective work. We have received the recent letter from Diageo and will be submitting our response.” She pointed to diversity efforts the agency participates in, including 3% Certification and Free the Bid, which is pushing for more female ad directors.

Wade added: “As part of the Baileys global digital agency-of-record selection process earlier this year, we showcased these diversity efforts to the team. We look forward to working with Diageo on their efforts to achieve gender balance and diversity in advertising.”

Anomaly and 72andSunny, two of Diageo’s largest creative agencies, declined to comment directly on the Diageo letter. 72andSunny publishes its gender diversity stats on its website. It shows that 20 percent of the agency’s creative directors globally are women, while 45 percent of employees at group director level and above are females. Carat declined comment.

Diageo has among the best track records for gender diversity in the alcohol industry. Women comprise 40 percent of its executive committee, while 45 percent of Diageo’s senior global marketing leaders are women. Earlier this year Diageo joined the Free the Bid organization, pledging to call on its ad agencies and content producers to include at least one female director on all creative bids. Also, Diageo recently developed a framework that it will use to improve gender portrayal in its marketing.

Diageo drew headlines in February when it put a woman on the face of Johnnie Walker bottles, calling her “Jane Walker,” as part of a limited-edition run timed with Women’s History Month.

Most of these diversity efforts only benefit white women. So nothing really changes. Diageo just wants to look good for PR purposes. No different than the democratic party vs republican party. Neither really care about minorities or specifically black people. One thing white people are good at are playing both sides of an argument. At one hand you have the fake liberal/fake integration folks. The other hand you have the segregation/why do we need diversity folk in corporate america. Neither are about the end of White Supremacy in corporate America.﻿ So in the end its still all white people. This is all just a smoke screen. At the end of the day her alliance still resides with white men. The real battle is between white women & white men, to see who will drive the white agenda going forward in corporate America. Notice she doesn't even mention ethnic diversity at all. This metoo/timesup/female empowerment only helps/benefits white women and ultimately white people.

There's not a single Diageo ad agency that doesn't have women working there, from entry level to executive positions.

There are however multiple Diageo ad agencies where dogs and plants outnumber POC.

So guess which one Diageo's addressing first, as a priority?

Their real interest, which is making sure white women (who turn around and hire other white women and white men) ascend the advertising industry ladder, is readily apparent. So is their disinterest in POC, which make up a lot of their consumers. So this is yet another case of a big company wanting to grab minority money, but without investing in minorities. That's why they don't hire or care about anything multicultural, except to snatch minority dollars off the table and give them to white women.