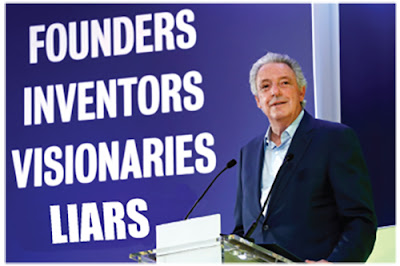 IPG Chairman and CEO Michael Roth is undoubtedly crossing his fingers that he wrote his last memo for 2018—as racist and sexist scandals at the White holding company prompted continuous messages to the troops over the past years.

The latest missive was posted at AgencySpy, which kinda indicates it’s not newsworthy material. However, there were a few gems to highlight:

FCB Health was named Healthcare Network of the Year, marking the third consecutive year an IPG agency has been awarded this prestigious honor.

Okay, but McCann Health pulled the plug on its Global CCO for violating the company’s Code of Conduct, marking too many consecutive years an IPG agency has been marred by this dubious honor. And the White man refuses to go quietly too.

At our annual Women’s Breakfast in Cannes, we [celebrated] “sheroes” who have changed the world through their excellence, perseverance and passion and featured feminist icon Gloria Steinem and founder of the #MeToo movement Tarana Burke.

Yeah, and the breakfast played on while the aforementioned Code of Conduct violator was quietly banned from attending Cannes. Hell, Ms. Burke could launch a #MeToo spin-off exclusively starring victims of IPG perpetrators and predators.

None of this would be possible without the supportive and inclusive communities we have worked so hard to build. At IPG, we take diversity, equality and inclusion seriously. An environment that encourages respect and trust is paramount, especially in a world often plagued by intolerance. This year we took additional actions to ensure that our workplaces and communities remain safe spaces. We hosted our first Day of Understanding with thought leaders on D&I and participants across the network. We spoke at major industry conferences and events on topics that included upholding change, what leadership looks like in violent times, and the importance of challenging stereotypes. One-third of all the women leaders who signed up in support of Time’s Up Advertising were from IPG and IPG agencies.

Um, none of this would be necessary if IPG wasn’t such a den of deviants. The “additional actions” were probably mandated by IPG attorneys feeling overwhelmed by discrimination and sexual harassment lawsuits. And the “women leaders” supporting TIME’S UP/Advertising were likely “encouraged” to do so by Roth versus drawing inspiration on their own. Finally, it’s a wonder Roth didn’t brag about being on an all-White D&I panel at Advertising Week.