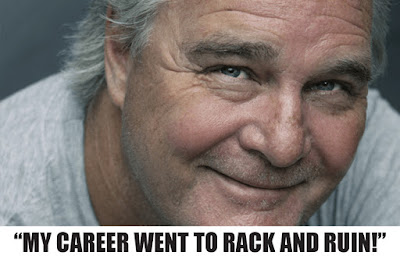 Adweek reported former McCann Health CCO Jeremy Perrott—who was fired last summer for allegedly using “offensive and inappropriate language” that violated the company’s Code of Conduct—filed a lawsuit against the White advertising agency and IPG for defamation and wrongful termination. In addition to seeking $25.4 million in damages, Perrott leveled charges that his former employers will likely deem even more offensive and inappropriate. The rest of the industry will likely deem Perrott’s tirade highly entertaining.

First of all, the court papers read like a melodramatic TV commercial script: “[Spurious.] Deceitful. Vengeful. Told with reckless disregard for the truth. Cowardly lies that poison and kill a man’s reputation. Rob him of his life’s work. Turn him into a leper and an outcast.” Gee, Perrott is really maximizing his experience working in pharma advertising with such copy.

Next, Perrott went straight after IPG Chairman and CEO Michael Roth, blasting the old man’s obsession “with diversity” as having created a “toxic corporate policy that encouraged, facilitated and condoned the lynching and character assassination of McCann Health’s phenomenally successful global CCO and his dismissal without any due process.” Wow, diversity is now being used to lynch White men. The filings whined that Perrott was canned thanks to an “unjust corporate culture of #MeToo and #TimesUp appeasement,” as well as “a corporate policy that spares no male at IPG, MWG or McCann Health.” Guess Perrott didn’t read Roth’s memo on zero tolerance for bad-boy behavior.

So what were Perrott’s culturally clueless crimes? According to the Adweek report, the former CCO allegedly told a female associate she had a “nice rack” and another had a “nice ass”—which he’ll undoubtedly insist were sincere compliments taken out of context and misinterpreted.

It will be interesting to see how Perrott fares, as he’s the maddest Mad Man to date. Specifically, he represents the growing unhappiness of White men in advertising and society at large. Hey, if serial sexual harasser Donald Trump landed in the White House, could Perrott lead the counterassault for White men to reclaim retain the power position on Madison Avenue?

Perrott is seeking $25.4 million in damages.

According to court papers filed in Virginia in late October, Perrott said he was fired by McCann and IPG unexpectedly for using “inappropriate language.”

When Perrott asked his employer for examples when he was fired, the suit states he was accused of telling a woman in a McCann Workgroup elevator in New York that she had a “nice rack.” The former CCO denied that allegation, saying he rarely was in New York.

According to the court filing, Perrott’s former employer also accused him of commenting to a woman, “nice ass,” which he also denied. The suit states McCann and IPG did not specify who made those accusations or where the second incident happened.

The suit describes the allegations and circumstances surrounding Perrott’s firing as “spurious. Deceitful. Vengeful. Told with reckless disregard for the truth. Cowardly lies that poison and kill a man’s reputation. Rob him of his life’s work. Turn him into a leper and an outcast.”

“We stand by our actions to protect our employees and our earlier and truthful statements. We will defend the case vigorously,” read a joint statement from IPG and McCann.

Adweek reached out to Perrott’s lawyer, who did not respond to an email and voicemail seeking further comment. Emails sent to each individual IPG employee named in the suit were not immediately returned, and Perott has not responded to requests for comment via his LinkedIn account.

Perrott, a native of Australia who held the title of global CCO at McCann Health since 2008, was fired in July. During his tenure, he also served as chairman of judges at Cannes Lions Health 2014 and inaugural president of the international LIA Health and Pharma Awards.

The McCann spokesperson declined to elaborate on what led the agency to fire Perrott but said it came after an investigation into “a complaint about a violation of our Code of Conduct.”

Perrott is suing McCann and IPG for defamation, the court filing asserts, because the two organizations leaked news of his firing to the press and because the July statement in which they alleged he was terminated because of a complaint against him was defamatory. A slew of McCann and IPG executives are mentioned in the suit, as well.

“The defendants’ categorically false and defamatory statements about Jeremy spread like wild-fire through the internet, social media and the advertising industry,” the suit states, “destroying Jeremy’s name and reputation, making him an instant pariah.”

The suit also names IPG chairman and CEO Michael Roth, claiming his preoccupation “with diversity” at the company has led to a “toxic corporate policy that encouraged, facilitated and condoned the lynching and character assassination of McCann Health’s phenomenally successful global CCO and his dismissal without any due process.”

Perrott’s lawyers wrote that he was fired due to an “unjust corporate culture of #MeToo and #TimesUp appeasement,” which later in the filing is described as “a corporate policy that spares no male at IPG, MWG or McCann Health.” The suit even cites Joe Alexander, IPG-owned The Martin Agency’s former CCO, who was fired following accusations of sexual harassment by multiple women (who then detailed their accusations directly to Adweek), as another victim of this “toxic policy.” He told Adweek those accusations were false, though one led to a six-figure settlement.

Perrott’s lawyer claims in the lawsuit that Perrott was “denied the right” to defend himself and instead was “immediately sacked and ordered to return to Australia.” The court filing states it would have been “basic decency” for McCann and IPG to identify Perrott’s accusers to him.

The suit also alleges McCann denied him the right to talk to the press or attend Cannes, where he was scheduled to be interviewed by TV and print media, in June.