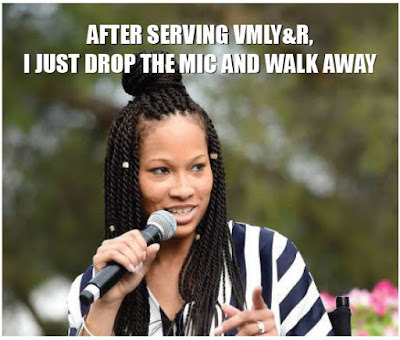 Advertising Age reported VMLY&R Director of Inclusion and Cultural Resonance God-Is Rivera will join Twitter as Global Director of Culture and Community. The lengthy job titles make it tough to tweet a suitable announcement in 140 characters.

“Her efforts will live on and thrive,” said VMLY&R Global CEO Jon Cook, viewing Rivera’s departure as an opportunity to evolve her role. “The replacement could come in all sorts of forms. I’m excited about the possibilities. What God-is and all the teams around her have created give us so many options on what’s next.” Yes, the mashup of one of the first White advertising agencies to gain certification from The 3% Movement and the White advertising agency responsible for “A Mind Is A Terrible Thing To Waste” should make for a diversity and inclusion breakthrough in adland. Then again, the new brand experience shop just lost a minority and a woman—a double whammy—which technically offsets any alleged progress.

God-is Rivera is leaving WPP agency VMLY&R to join Twitter as its global director of culture and community, a new role at the company.

Rivera — herself a prolific tweeter with an impressive command of GIF reactions — will be responsible for ensuring Twitter’s campaigns and programs are “connective, inclusive and reflective” of communities it serves, Twitter said in a statement. She’ll also be working on relationships and programs with outside individuals and organizations — projects like #HereWeAre, which kicked off early this year at CES after the tech conference had not featured any solo female keynotes.

The departure comes a month after WPP merged VML with sibling shop Y&R.

Bronx native Rivera joined VML in 2016 in a social media strategy role (she’s also worked at iCrossing and Austin-based T3), but after trying to get her agency to talk more openly about issues of inclusion and diversity, her role eventually evolved into the director of inclusion and cultural resonance. She’s been a frequent speaker at industry events on those topics.

Rivera told Ad Age she’s had a relationship with Twitter for some time; she took part in a panel on #BlackTwitter at Advertising Week NYC last year and spoke at Twitter’s #OneTeam summit this summer.

She says the new gig is somewhat of a “graduation” of what she was doing before.

“I feel that although the challenges are much bigger in scale, [Twitter has] a larger platform to address them,” she says.

Rivera describes her new role as an interaction between brand communications and experiential — “so that we can bring the energy of Twitter communities and their voices both on and off the platform,” she says. She hopes to use that to connect with communities on topics like voting or the Flint water crisis.

VMLY&R global CEO Jon Cook says Rivera “selflessly advanced a progressive mindset and approach to belongingness and personal expression to the benefit of VMLY&R and our entire industry.”

“Her efforts will live on and thrive,” he says. Cook says the agency will use her departure as a chance to doing a next evolution of the role. “The replacement could come in all sorts of forms. I’m excited about the possibilities. What God-is and all the teams around her have created give us so many options on what’s next.”

Rivera adds that her appointment is a reminder that tech companies can look to people from different industries or who have different backgrounds, not just those already working in the sector. “I’m really proud to be a black woman leading this effort at Twitter,” she says.