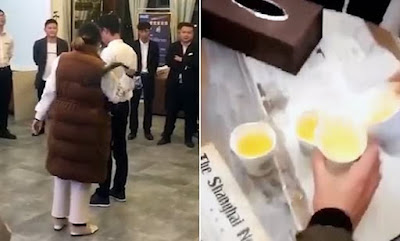 Newsweek reported on workers at a Chinese home improvement company being whipped with belts—as well as ordered to eat cockroaches and drink urine—for failing to meet sales goals. Imagine if the CEOS of White holding companies were held to similarly rigorous standards of performance and faced such punishments for financial flops? The Big 4 could change their names to WPeePee, Omnicockroach, Pubeltcis Groupe and IPeeG. 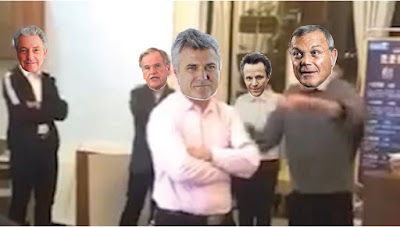 Three managers at a home improvement company in China have been jailed after reportedly forcing employees to eat cockroaches and drink urine as punishment for missing sales targets.

According to the South China Morning Post, the abusive behavior came to light after videos emerged on social media showing workers being whipped with a belt and drinking an unidentified yellow liquid while holding their noses.

Though the footage has now been taken down, local media sites were able to capture screenshots of the videos showing abuse. The employees were working for a home renovation company in the southwestern province of Guizhou, the BBC noted.

The footage prompted a wave of outrage as it spread on social media site Weibo. Additional posts allegedly showed screenshots of messages from managers threatening a host of other punishments for workers, including eating cockroaches.

The revelations sparked the hashtag “employees who failed to meet their goals forced to drink urine,” which has now been viewed almost 540,000 times.

The punishments were apparently part of a wider culture of abuse at the company, which included forcing underperforming employees to sell condoms and sanitary pads on the street, drink toilet water or vinegar and have their heads shaved.

Others were forced to eat large amounts of wasabi mustard, China’s Global Times reported. One screengrab translated by the newspaper explained: “If employees couldn’t sign enough orders by the end of the month, their team leader had to eat three cockroaches for every order their team was short.”

The company had also withheld workers’ salaries for the past two months, with employees scared to complain in fear of losing their jobs. One staff member said the managers threatened to reduce their severance pay if they resigned.

Police in Zunyi county arrested three managers, two of whom were sentenced to 10 days in jail and one to five days. The culprits were only identified by their last names—Guo, Cai, and Huang.

The Post suggested that reports of abuse in the workplace are becoming more common as slowing economic growth in China prompts labor unrest and demands for improved worker rights.

Previous reports have detailed workers slapping each other at a company event to improve motivation, or crawling around public roads and kissing dumpsters as punishments or in team-building exercises, the BBC added.