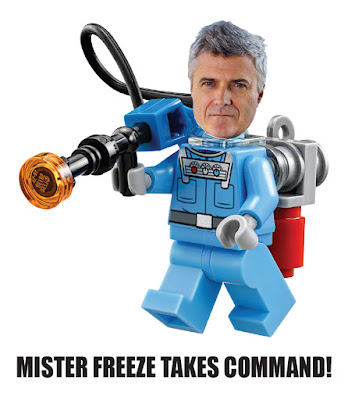 Campaign reported WPP implemented a hiring freeze for the remainder of 2018. Of course, there’s no promise of a firing freeze. In fact, layoffs are almost guaranteed as the White holding company tries to make sense of all the moronic mergers and crazy consolidations being executed by WPP CEO Mark Read. Oh, and VMLY&R won’t be allowed to hire a replacement for God-is Rivera, and instead at least temporarily resort to delegating diversity to existing minority staffers. Holding companies boast the ability to deliver resources from multiple networks and agencies, positioning themselves as a big, happy family. Yet when a major client drives away, one never hears if affected employees are offered available positions at sister shops. Sadly, WPP drones can expect a long, cold winter.

The group had been expected to hire about 2,000 new employees.

WPP has instructed its senior leadership to suspend recruitment plans until the new year, according to reports.

The report cites a memo circulated by group financial controller David Barker on 26 October informing staff that measures must be taken to “try and protect” the company’s long-term health. “We need to take urgent action to stop this now,” it added.

WPP, which has 134,000 employees, was understood to be looking to hire about 2,000 people, the report adds, although it is understood that the timing of such a memo in the fourth quarter represents fairly normal procedure.

A WPP spokesperson told Campaign: “We’ve made it clear there are priority areas for investment for growth, and these will be unaffected.”

It comes after new WPP chief executive Mark Read announced a 1.5% slide in third-quarter revenues. The ensuing slump in share price means the company’s value had more than halved in 18 months, from £24bn to about £11.5bn, according to estimates.

Speaking to Campaign after the figures were released, Read said he will consider grouping agencies together, rather than just merging them, as he seeks to simplify the company.

Read said WPP must face up to the “realities” of its position and the latest results “strengthen our resolve” to shake up the group.

“We’ve got many fantastic people, assets and resources within WPP. We just need to make it simpler and easier for clients to get access to,” he said.